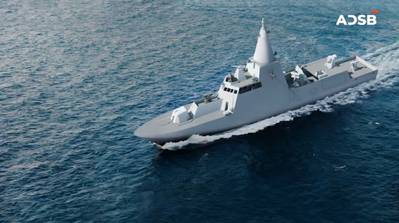 The Falaj 3-class Offshore Patrol Vessel contract was ADSB's largest ever order, which Chief Executive David Massey said gave it a sustainable and profitable future for the next five years.

ADSB will build all four hulls in Abu Dhabi, the UAE capital, and is responsible for integrating systems, he said.

Massey told Reuters ADSB first entered into talks with the UAE for the vessel contract six years ago and that over the past two years the sides had been negotiating the terms of the award.

ADSB was also in talks with the UAE for several upgrade and refit awards and was hopeful it would announce later this year or early next year an export deal for smaller vessels, he said.

ADSB, 40% owned by state defense conglomerate EDGE and 10% owned by the Abu Dhabi government, has built Baynunah-class corvettes for the UAE navy, the last of which it said was delivered in 2017.