AET Completes its First LNG Bunkering in the US 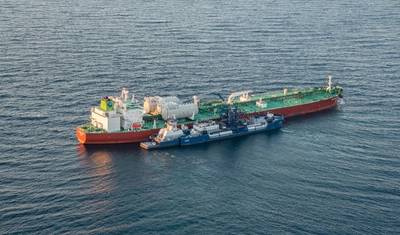 The transfer of 600 metric tons of marine LNG onto the 113,305 DWT petroleum tanker from the Q-LNG 4000 bunker barge was completed within three hours while the entire bunkering operations took nine hours, AET said.

The operation was coordinated by AET and Shell NA LNG LLC while Pacific Ruby was on its way from Houston bound for Rotterdam.

"This bunkering milestone also represents further progress in AET’s commitment to reduce the environmental impact of shipping by using lower emission fuels worldwide. At the same time, it also represents another example of the rapid extension of LNG bunkering facilities in the US and globally, allowing LNG supply for transatlantic tanker routes between Europe and the US," AET said.

Tahir Faruqui, Head of Shell Downstream LNG said: “The shipping sector must find fuels for the long-term, but also act today. LNG is a clear choice for immediate reduction in shipping emissions. It is a fuel in transition that offers potential pathways via bio and synthetic LNG for developing zero emission options."