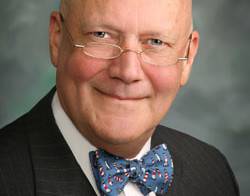 John A. C. Cartner, member of the Board of Advisors, AdvanFort

By John A. C. Cartner

Piracy is now confined to one principal area. But piracy is similar to blood — a little spilled goes a long way. Piracy will spread elsewhere when and if strong emphasis is put on the Gulf of Guinea.

Let us look at the hard facts in this hard business. Here is the seagoing manpower for each state and the vessels available from north to south, as well as their populations and GDPs. Taken together these statements are probably fairly truthful. Third party reports confirm this about uniformed persons and equipment, GDPs and populations.

There we have it. There are perhaps 300 craft and ships. Good sources suggest that there is perhaps 50% operational capability in the lot. Thus, 150 craft and ships remain. Further, many are perhaps not useful for suppressing the kind of piracy evident in the Gulf of Guinea, say 75% — thus, 37 to 40 perhaps are useful and ready.

It is clear that the western African states are not naval powers. There are maybe 75,000 uniformed persons. Of these 75% are land forces. Read it and be afraid of piracy in western African water.

The total population is some 387,000,000 persons. The combined GDP is, in US Dollars, $558 billion (2012). The GDP of California was $1.9 trillion in 2010. Read this and be sad about western African people. The GPD per capita per month is $120 — the cost of an unpalatable dinner for one in a mediocre Manhattan hotel dining room. Read this and feel queasy about western African existence.

Even if the western African states could agree to combined operations or even coordinated operations — things not seen heretofore in polarized and politicized Africa — what is left, other than words to suppress piracy, is sad in the most liberal estimates. Read this and be resigned about western Africa politics.

The craft and ships and persons available have other established missions such as fisheries and customs duties, as well as national security defenses. The coastline from the northern border of Morocco to the southern border of Angola is approximately 4,650 miles — depending on who is measuring. Assuming UNCLOS jurisdictional waters, this area comprises some 2.1 million square miles to mind. This is for some 40 craft and ships. That means each is responsible for an area 54,000 square miles or a box of 735 miles per side. That is neither practicable nor effective. Pirates are not very careful about UNCLOS limits. Pirates are opportunists who operate where naval forces do not operate. Getting caught makes for a bad day for a pirate. The odds are there will be few bad days for pirates in western Africa. One may be challenged or one may retreat from these realities in western Africa.

Remember that the traffic for VLCCs and ULCCs from the Cape of Good Hope to Europe is vulnerable in addition to the container vessels calling west Africa and vice versa for each. Then there are the fishing vessels and the smaller coastal ships and older break- bulk ships and ore carriers. Navigation and protection areas aside, forces otherwise uninformed go where the pirates were last. The barn door is thereby shut firmly after the horse is out.

It is unclear that the western African states have the kinds of surveillance equipment or intelligence capabilities required for the mission to be successful. Those things are expensive, as is the training to use them. Indeed, for many states — not just in western African — they are merely glints in the eyes of their naval commanders.

Then there are small arms however you choose to define them. The customs rules are strict and strictly enforced. Destabilization is always a fear. After all, what would a good coup be without some gunshots?

Looking at the GDPs of the Western Africa states and their demographics, politics and fears, it is clear that they collectively simply cannot afford to have naval, coast guard and customs forces ready and capable of dealing with pirates. The collective will of western

Africa does and will have a great difficulty in putting the common good ahead of state politics. Western Africa needs industrialized state help to deal effectively with these criminals.

The facts do not offer a great deal of hope or assistance from those in the general neighborhood of western African piracy.