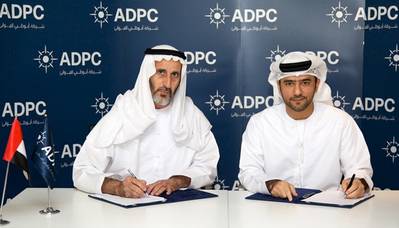 Abu Dhabi Ports Company (ADPC) has signed a ten year agreement with Emirates Aluminium (EMAL), to handle the export logistics of finished aluminium products from EMAL’s production site. The volume of exported metal will grow gradually from 600,000 metric tonnes in 2014 to 750,000 in 2015 onwards.

The signed agreement covers all of the handling operations and transport logistics for the finished products from EMAL’s site to the container freight station and export terminal at Khalifa Port.

EMAL’s site in Khalifa Industrial Zone Abu Dhabi (Kizad), adjacent to the port, houses one of the largest industrial projects in the UAE, one of the biggest single site smelter in the world and the fastest to produce 1.3 million tonnes of hot metal.

The two companies have worked closely with Abu Dhabi Terminals (ADT), the container terminal operator at Khalifa Port, to develop a smooth and seamless cargo operation that will facilitate fast turnaround of product and containers through the KPCT facility. Furthermore, ADT is working with several container shipping lines and carriers to increase the frequency of direct calls at Khalifa Port to serve EMAL exports.