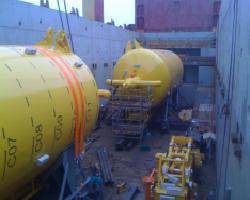 SPM Top Assembly and Buoyancy Tank fitted into the hold

The first voyage of 1800nm from Bayonne F to Arbatax I carrying four SPM top assembly weighing 33t each into the hold.

As requested by tender was developed a deep analysy of the transport considering:
- the vessel description and the study of the layout on decks
- the vessel c.o.g. with cargoes on board and the relevant stability calculation
- the routing and heading analysis, the voyage duration and the study of the wave climate
- the calculation of the ship motions response by means of the ship RAOs through the actual wave climate in order to define the acceleration acting on all the items.
- the calculation of the necessary sea fastening with particular care to the items structures stress level
- the calculation of the accelerations following the wave climate and the percentage of occurrence of every sea state so to calculate the fatigue damage by means of the Miner's law.

RINA surveyed the seafastening on both departure harbours and the transport ended successfully being the ship now on site ready to unload the items.