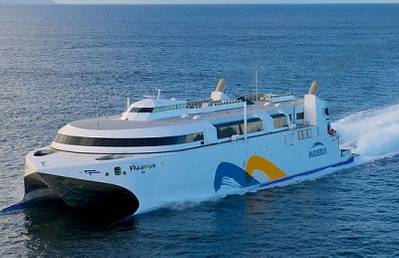 A ferry operator’s experience of ‘the fastest ship in the world’ will feature among the cutting-edge initiatives being aired at Interferry’s 38th annual conference in Malta from October 5-9.

The trade association event gives South American operator Buquebus a first opportunity to showcase the commercial and technical benefits of its revolutionary newbuild Francisco. Delivered in August from Australian builder Incat Tasmania, the catamaran is the world’s first high speed dual fuel ro-ro to use LNG as its primary fuel.

Incat made the “fastest ship” claim after sea trials in June. The 99-meter long vessel, which can carry 1,000 passengers and 150 cars, notched a lightship speed of 58.1 knots using only LNG and also topped its 50-knot loaded service speed when running in marine distillate and gas/distillate configurations.

The vessel enables Buquebus to compete with airlines on the Argentina-Uruguay River Plate route from Buenos Aires to Montevideo. Incat chairman Robert Clifford, who will support the presentation, stressed, “It represents a significant step in the global move for natural gas-powered ships to replace less environmentally friendly fuels.”

Alternative fuels will be a major topic at the conference. Future environmental and energy efficiency challenges are being reviewed by Björn Rosengren - one of five special guest speakers – who is president & CEO of Francisco water jets supplier Wärtsilä. There are also four papers exploring the latest technology on emissions and efficiencies.

Managing director Per Westling will explain why Sweden’s Stena RoRo is looking to meet SOx and NOx limits in Environmental Control Areas by using methanol. “It has very similar environmental characteristics to LNG but several advantages when it comes to availability, port infrastructure and the realistic feasibility to convert existing ships,” he argued. “In our view it is an obvious alternative as a long-term, future-proof fuel.”

Both fuels, as well as DME, are being investigated by the 14-strong Green Ship of The Future partnership. Their study into reducing ro-pax emissions and fuel consumption will be outlined by Anders Ørgård Hansen, managing director of Denmark-based consultancy OSK-ShipTech, and Claus Winter Graugaard, a business and product development manager with DNV. The research also covers factors such as general design, machinery and propulsion. Findings are being benchmarked against operational data from Destination Gotland’s MS Visby on service to and from the Swedish mainland.

A batteries and scrubbers solution to sulphur restrictions is being presented by Denmark’s Claus Nikolajsen, technical and operations VP at Scandlines. Company services include a ten-mile route served by four diesel-electric ships with very low average engine load, leading to poor performance. Mr Nikolajsen will describe an energy storage system that enables one engine to run at full load, stores any excess energy and releases the stored power on demand – reducing consumption by 12-15%. The system also allows scrubber capacity to be cut from an estimated 10.5 MW to just 3.5 MW.

A performance-enhancing new bow form that optimises fuel consumption and helps reduce CO2 emissions by more than 40% will be highlighted by Per Egil Vedlog, design manager at the Rolls-Royce merchant ship technology centre in Norway. The company’s Enviroship concept caters for fixed route operations with scheduled arrival times, particularly when vessels drive too hard to make up for lost time after slowing down in heavy seas. Mr Vedlog will explain how the novel bow form enables less speed reduction, reduced acceleration and lower risk of forebody hull plate deformation.

Safety – in both developed and developing nations - will also be a recurring theme at this year’s conference, when notably the number of presentations has been reduced to accommodate an extended line-up of special guest speakers as well as several panel discussions.

Following a welcome address from Malta’s 39-year-old newly-elected Prime Minister Joseph Muscat, IMO Maritime Safety Committee chairman Christian Breinholtz will make a keynote speech on the need for cooperation between regulators and operators. Former SAS airline pilot Jarle Gimmestad, now a safety consultant, will add to the debate with observations from the aviation industry. In addition, two presentations on damage stability will be followed by a discussion on the implications of new safety regulations. The panel includes representatives from Brittany Ferries, Color Line and P&O Ferries and Interferry executive director for EU & IMO affairs Johan Roos.

In two further panel sessions, ferry operator CEOs will examine the industry’s main opportunities and concerns. The first features views from the Attica Group, BC Ferries, P&O Ferries and Stena on issues such as government relations, collapsing economies, stagnant markets and new regulations. Smaller operators from Australia, Malta, the UK and the US will then address topics including safety, natural disasters, local governments, competition for labour and services in remote communities. Delegates will be encouraged to participate through a facility enabling them to send questions or comments via text messages from mobile phones, tablets or laptops. Their input will appear on-screen for immediate inclusion in the debate.