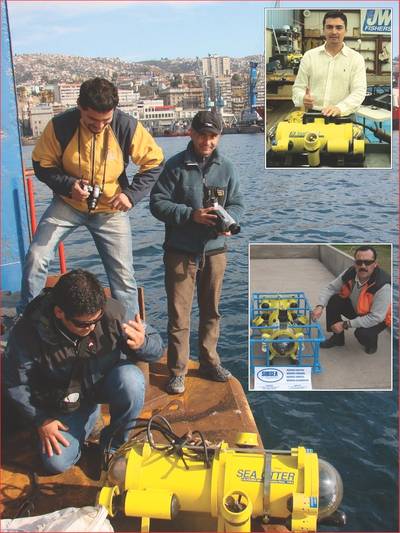 Subsea Engineering in Santiago, Chile is one of many South American enterprises and military establishments adding ROVs in an effort to expand their operational capabilities.

The company offers a complete package of design and construction services including the building of pipelines and installation of submarine power and communications cables.  Owner Pedro Campos is a certified Naval and Marine Engineer, and a member of the International Association of Diving Contractors. Campos says “performing underwater operations in my country is complex and challenging. We have the Los Andes Ridge in the east and deep trenches in the west. Along the coast, great depths are reached rapidly and sophisticated diving equipment is required with the associated extra-cost. An ROV is an essential tool for working in these environments.”  The company purchased a JW Fishers SeaLion ROV to assist in their projects as it has the power and depth rating required to operate there.  A scanning sonar was added to help the ROV operator navigate the vehicle in the area’s low visibility waters.

Another marine engineering firm in Chile that has added an ROV is Landmarine Ltda.  Landmarine’s owner, Fernando Landeta, is certified in trimix and rebreather diver and served as one of the scientific divers on an expedition to recover the bell from the German cruiser Dresden sunk in 200 feet of water in 1915 near the Chilean island of Mas a Tierra (today known as Robinson Crusoe island).  Landmarine offers a variety of services including underwater inspection and repair. “We acquired a Fishers SeaOtter ROV to help in these operations”, says Landeta. “The ROV dramatically reduces in-water time of the diver and sometimes completely eliminates the need to dive.”  The company recently added a Pulse 8X handheld underwater metal detector to aid in their search and recovery work.

Next door in Argentina is Prefectura Naval (PNA), a branch of the country’s Interior Ministry with a mission similar to the US Coast Guard.  Like the USCG, PNA’s job is to protect the country’s rivers and maritime territory.  Part of their responsibility is ensuring safety and security in Argentina’s ports.  PNA routinely inspects inbound and outbound ships to prevent smuggling of drugs or other illegal cargos, and to make sure the vessels are not polluting local waters. To aid in these operations Prefertura Naval purchased a SeaLion ROV. The highly maneuverable underwater vehicle can quickly and easily inspect the hull of vessel in search of secret compartments and looking for discharge of fuel or other fluids.

On the other side of the continent the Brazilian Navy is using a SeaLion-2, Fishers’ newest ROV model. Brazil’s Navy is the largest in Latin America with 60,000 active personnel, 100 commissioned ships including 5 submarines, and 89 aircraft.  With its two cameras and four powerful thrusters, the new compact ROV gives the Navy the ability to perform immediate in-water inspections of a ship’s hull or propulsion system, even in open ocean.  Having the ROV also allows instant inspection of any of the underwater structures or vessels at the more than a dozen Navy bases throughout the country.

Over in Ecuador, the GDC Dive Center and Submarine Activities Cdla Miraflores has added a new SeaOtter-2 to assist in their underwater operations. One of the principals in the business is Edwin Ortega, an officer in the Ecuadorian Navy and a man with extensive diving experience.  He reports the ROV will be used for recreational applications such as inspecting new diving sites for the dive center, and also for commercial projects such as inspection of seawalls, piers, bridge supports, and other underwater structures.

Up in Venezuela construction conglomerate Trime C.A. used their SeaLion to inspect a 305 meter long dam in a water depth of 50 meters. Company spokesman Bertram Buhl reports, "the ROV allowed us to inspect the entire face of the dam without once deploying a diver. Trime also acquired one of Fishers high intensity underwater lights system  which was attached to a drop camera to assist in the operation.