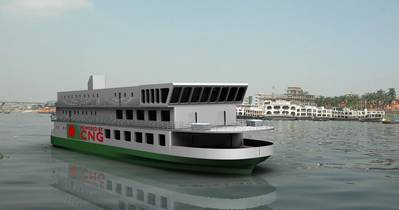 Today the results of the World Ferry Safety Association international student design competition for a Safe Affordable Ferry were announced. The goal of the design competition is to elicit new approaches for ferry design in the developing world as well as to encourage designers to enter this arena, for which there is a need and an emerging market.

An announcement of the winners, chosen by an esteemed team of judges (see below), and a recognition of all participants, will take place at the Annual Meeting of Interferry, in Malta, on October 7. Following the submissions, Dr. Roberta Weisbrod, Executive Director of the WFSA said, “All teams were technically strong and many had innovative approaches.“

The winning entry: The WFSA top prize of $5000 is to be awarded to the student team from the University of British Columbia, Canada. The team designed a monohull vessel that had exceptional stability characteristics. The entry was very complete in terms of design features and cost and fuel analysis. Features include CNG fueled engines, modular cabins, and handicapped access. A conceptual rendering of the winning design is attached to this release, a downloadable version can be found online at http://www.conconnect.com/wfsa.html .

The runners up: The second prize of $3000 is to be awarded to a team from Tolani Maritime Institute, Pune, India, and two third prizes of $1000 each will be awarded to teams from Istanbul Technical University, Istanbul, Turkey and University of Applied Sciences, Bremen, Germany. Tolani Maritime Institute team also designed a monohull vessel that was extremely stable with good under-keel clearance, made allowances for upstream and shallow water effects, with redundancy built in with twin screws and diesel engines. Istanbul Technical University students’ submission had good overall design appropriate to the route characteristics and was clearly designed for the comfort of passengers and tourists. The University of Applied Sciences of Bremen students designed a vessel that was stable, with double sides and double bottoms, with redundancy in engine rooms and twin screws, and with bow thrusters for docking.

“The remaining entrants all had commendable designs, which we hope they too will carry forward,” said Dr. Roberta Weisbrod. Webb Institute’s team designed a stable functional vessel with bow thrusters and containing an emergency generator. The vessel had an innovative feature that could be applicable in other services – like the extra leaves for a table they invented a design that could extend the capacity upon demand. The National Technical University of Athens students designed a vessel that had good esthetics, many amenities for the customers, good structural design and a 360-wheelhouse view. The students from the Maine Maritime Academy sea presented an intriguing design based on a trimaran hull used for fishing fleets; unfortunately the necessity of students having to go to sea prevented them from completing the analysis.


Information about the judges:

Dr. Alfred Baird is Professor of Maritime Economics at Napier University Transportation Research Institute in Edinburgh and has published his policy research on ferry transport in the global marketplace.

Dr. Charles Cushing, President of the marine engineering/naval architect firm, C.R. Cushing & Co. based in New York City. He has designed, built, and/or supervised the construction of over 250 vessels. He is an elected member of the U.S. National Academy of Engineering and is the author of the book, Marine Casualty Safety Investigations, published in 2013.

Mr. Joe Hudspeth is Vice President of Business Development, All American Marine, in Bellingham Washington. He writes the Boat Building column for Marine News and is a frequently invited speaker because of his insights on maritime issues.

Mr. Fakhrul Islam is the Chief Engineer and Ship Surveyor of the Bangladesh Department of Shipping in Dhaka. Mr. Islam drafted the specifications of the vessel toward which students designed their submissions.

Ms. Thalia Kruger works for the American Bureau of Shipping as the Manager Energy Project Development in Houston. As a marine engineer/naval architect she has been responsible for construction of numerous vessels and marine structures. Chair of the Texas section of the Society of Naval Architects and Marine Engineers (SNAME), she has actively promoted international student engagement in SNAME, particularly through design competitions.