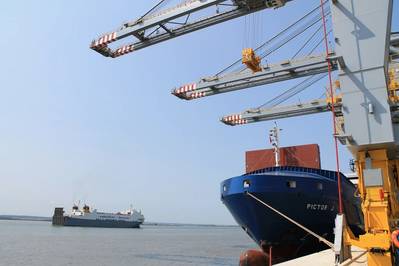 Maritime services provider Inchcape Shipping Services (ISS) was recently appointed by DP World as port agent for the vessel M/V Pictor J which arrived at DP World’s London Gateway. Chartered by DP World, the M/V Pictor J berthed at London Gateway ahead of the first commercial vessels which will arrive after the official opening in Q4 later this year.

This was the first vessel DP World have brought into London Gateway under their own stewardship and will be used as a training vessel to teach operational skills to staff at the port.

ISS handled all the arrival formalities of the container vessel, which travelled from Germany and will also be handling all husbandry requirements over the charter period, including reporting requirements, stores, crew changes, crew welfare as well as acting as the interface between the port and the ship.

Welcomed to port by new Harbor Master, Colin Hitchcock and Deputy Harbour Master, James Hannon, London Gateway will use the vessel to teach operational skills at the port.

With an investment of £1.5 billion, London Gateway will combine the U.K.’s newest deepsea container port with Europe’s largest logistics park and facilities will include six quays and a total of 24 cranes.

ISS also provided port agency for the arrival in March of the giant quay cranes at London Gateway on the heavy-lift vessel operated by Shanghai Zhenhua Shipping Co, the Zhen Hua 26.  These quay cranes, the largest in Britain are bigger than the London Eye and weigh 2,000 metric tons each.

Singapore has maintained its position as the world's top shipping hub for the seventh year straight, according to a report…