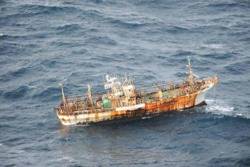 The shrimping vessel was floating slowly northwest in the Gulf of Alaska about 125 miles west of the nearest point of land — Forrester Island outside the Dixon Entrance, a maritime transportation corridor separating U.S. and Canada jurisdictions. The ship is heading in the direction of the south-east Alaska town of Sitka 170 miles to the north, traveling at about one mile per hour, Coast Guard spokesman David Mosley said.

“Our main concern is maritime traffic,” he said. “We’re trying to minimize any safety concerns, alerting vessels. We don’t want any vessels to run into it.”

A Coast Guard C-130 was heading to the ship to pinpoint the exact location and check if a data buoy was successfully dropped on it earlier.

The vessel has been adrift since it was launched by the tsunami caused by the magnitude-9.0 earthquake that struck Japan last year. About 5 million tons of debris were swept into the ocean by the tsunami.

The ship, named Ryou-Un Maru, is believed to be 150 feet to 200 feet long, according to Mosley, and has been identified as coming from Hokkaido, Japan.

Beside marine traffic hazards, another concern is the ship’s impact on the maritime environment after floating at sea more than a year. What’s on board is unknown. Also unknown is whether the ship is carrying fuel.

Officials are studying various options on how to deal with the ship, including scuttling it at sea or towing it to land.