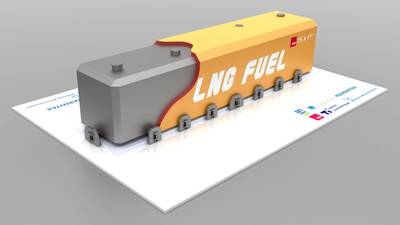 NLI Solutions and Wilhelmsen Technical Solutions have received Approval in Principle from DNV on a jointly developed LNG Fuel Tank solution based on the NLI LNG tank design.

The two companies have worked on the development of a LNG fuel tank design since 2009 in response to growing interest from shipowners to the use of LNG as a marine fuel. The tank is designed to IMO-B standards and is a prismatic, atmospheric and self-supporting LNG steel tank with state of the art cryogenic insulation. Parts of the tank system are patent pending. The two partners have complementary competences:

WTS has through its subsidiary Ti Marine Contracting more than 40 years of world class competence within cryogenic insulation and systems.
NLI is an experienced engineering and fabrication specialist with long track record from the early ‘70s within offshore and marine structures and process plants.

The first stage of the LNG Fuel Tank development project was co-financed by the Norwegian Research Council’s MAROFF program, and Wilhelmsen Marine Consultants, Liquiline, DNV and Marintek participated as partners in the development. The NLI LNG tank design is well-suited for applications including ship board LNG bunker tanks, tanks for LNG bunker vessels, small LNG carriers and small to medium sized tanks on land. This first AiP from DNV is valid for the system to be used as marine LNG fuel tanks.

The two partners are now planning to further develop the tank concept and in the future promote the tank design to the marine industry and the small scale LNG distribution sector. The shift towards the use of LNG for marine propulsion is said to be as significant as the shift from coal to oil but with the additional environmental benefit of lower CO2 emissions. There will also be a significant financial benefit for ship owners as gas prices are expected to remain competitive over time compared with to diesel and distillate products.