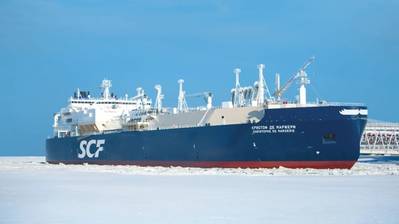 The Arctic LNG 2 partners have signed the charter agreements will SMART LNG, a joint venture established in September 2019 between NOVATEK and PAO Sovcomflot.

The vessels will be built in Russia's Zvezda Shipbuilding Complex and will serve the giant Arctic LNG 2 project on the Gydan peninsula, Russia.

The LNG Carriers will operate under the Russian Federation flag. The Russian Maritime Register of Shipping (RS) will provide technical supervision during the construction of the vessel series.

"The signing of the charter agreements allowed SMART LNG to conclude the corresponding contracts with the VEB.RF Group and Zvezda Shipbuilding Complex LLC for the construction and lease financing of these vessels," Novatek said.

In October 2019, the contracts were signed for chartering, financing and construction of a pilot ice-class LNG tanker to be built at the Zvezda shipyard.

Earlier, the participants of Arctic LNG 2 - NOVATEK, TOTAL, CNPC, CNOOC, and the consortium of Mitsui and JOGMEC - approved the construction of 15 Arc7 ice-class LNG tankers at Zvezda Shipbuilding Complex.

"The construction of 15 state-of-the-art ice-class gas tankers ensures the core formation of the Arctic fleet for the Project that will allow the year round transport of LNG along the Northern Sea Route to the Asian Pacific region, and provide an important stimulus to develop the Russian shipbuilding industry," NOVATEK said.

The vessels will be operated under the Russian Federation flag. The Russian Maritime Register of Shipping (RS) will provide supervision during the construction of the vessel series.

Igor Tonkovidov, President and CEO of Sovcomflot said:" Shipbuilding and time charter contracts for 15 Arc7 LNG carriers, signed between 2019-2020, enable the Russian shipping community to play a role in transporting cargoes of strategic importance for the Russian economy, which are generated by large-scale energy projects in the Russian Arctic."

"These contracts will also help to further develop our national expertise in ice navigation and create over 850 new jobs for Russian seafarers, as all the 15 vessels will have Russian crews. We are pleased to see that this new generation of Arctic LNG carriers, which will contribute significantly to growing the cargo traffic along the Northern Sea Route, was designed based on SCF’s long-standing experience of safely operating vessels in ice conditions. Equally significant is the fact that the cooperation between SCF, NOVATEK, VEB.RF Group and Russian shipbuilders paves the way for establishing the domestic production of LNG carriers, which entails adopting advanced technologies and engineering solutions,” Tonkovidov said.

Sovcomflot has previously said that the design of the LNG carrier series for the project series draws upon the experience of operating Christophe de Margerie, the world’s first icebreaking LNG carrier, introduced in 2017.

As previously said, the tankers will serve the Arctic LNG 2 project on the Gydan peninsula, Russia. The LNG project will have a production capacity of 19.8 million tons per year (Mt/y) and is expected to export its first LNG cargo by 2023, the second and third train to start up by 2024 and 2026. Arctic LNG 2 envisages constructing three LNG liquefaction trains using offshore gravity-based structure (GBS) platforms.

Novatek operates the Arctic LNG 2 project with a 60% stake. France's TOTAL owns 10%, China's CNPC and CNOOC own 10% each, and the Japanese consortium of Mitsui and JOGMEC owns a 10% stake.