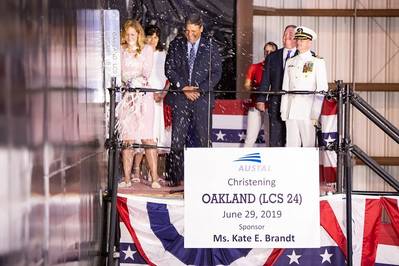 Austal USA hosted the christening of the future USS Oakland (LCS 24). This is the first of three U.S. Navy ships to be christened at Austal’s state-of-the-art ship manufacturing facility in 2019.

Oakland is the 12th of 19 Independence-variant littoral combat ships (LCSs) Austal USA has under contract with the U.S. Navy. The ship’s sponsor, Kate Brandt, a recipient of the Distinguished Public Service Award, the highest award the U.S. Navy can give to a civilian, headlined the group of officials, naval guests, civic leaders, community members, and Austal USA employees who attended the ceremony beneath the hull of the ship in Austal USA’s final assembly bay.

As Google’s sustainability officer, Brandt leads sustainability across Google’s worldwide operations, products, and supply chain. Previously Brandt served as the nation's first chief sustainability officer where she was responsible for promoting sustainability across federal government operations including 360,000 buildings, 650,000 vehicles, and $445 billion annually in purchased goods and services. Brandt’s prior government service also includes senior advisor at the Department of Energy, director for Energy and Environment in the White House Office of Presidential Personnel, and energy advisor to the Secretary of the Navy.

A Gates Cambridge Scholar who graduated with honors from Brown University, Brandt currently serves on the boards of The Institute at Brown for Environment and Society, The Roosevelt Institute, Planet Forward, and the Stanford International Affairs Network.

The Independence-variant LCS is a high-speed, agile, shallow draft, focused-mission surface combatant designed to conduct surface warfare, anti-submarine warfare, and mine countermeasures missions in the littoral region. With its open architecture design, the LCS can support modular weapons, sensor systems and a variety of manned and unmanned vehicles to capture and sustain littoral maritime supremacy.

In addition to being in full-rate production for the LCS program, Austal USA is also the Navy’s prime contractor for the Expeditionary Fast Transport (EPF) program. Austal has delivered 10 EPF, with a total of 14 under contract.