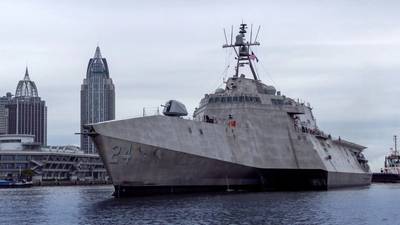 The future USS Oakland (LCS24) is the 12th Independence-class Littoral Combat Ship to be delivered by Austal USA (Image: Austal)

The U.S. Navy accepted delivery of the future USS Oakland (LCS 24) Friday during a ceremony at Austal USA in Mobile, Ala. The delivery marks the final milestone prior to the ship's scheduled commissioning in early 2021.

Oakland is the 22nd littoral combat ship (LCS) and the 12th of the Independence variant to join the U.S. Navy fleet. Its delivery marks the official transfer of the ship from the shipbuilder to the Navy, bringing the service's inventory up to 300.

“This is a great day for the Navy and our country with the delivery of the future USS Oakland,” said LCS program manager Capt. Mike Taylor. “This ship will play an essential role in in carrying out our nation’s future maritime strategy.”

The future USS Oakland is the third U.S. Navy ship to honor the long history its namesake city has had with the Navy. The first Oakland was commissioned in 1918 and used to transport cargo. In 1943 the second USS Oakland was commissioned. Though in service for less than seven years, she was key to many anti-aircraft missions in the Western Pacific—Marshall Islands, Pagan Island, Guam, Iwo Jima, Rota, Peleliu and Okinawa. After the war, Oakland performed two duty patrols off the coast of China before her decommissioning in 1949.

The LCS is a fast, agile, mission-focused platform designed to operate in near-shore environments, while capable of open-ocean tasking. It is engineered to defeat asymmetric “anti-access” threats such as mines, quiet diesel submarines and fast surface craft. The Independence-variant LCS integrates new technology and capability to support current and future mission capability from deep water to the littorals.

“We’re so excited to deliver Oakland to the fleet,” Austal USA President Craig Perciavalle said. “Every milestone we accomplish during these unprecedented times is a true testament to the extraordinary skill and dedication of our LCS team – an indication of the success of our efforts to minimize the impact of the pandemic. The efficiency at which we’re delivering these ships is nothing short of world class.”

Upgrades on the LCS program continue to take shape both with inline production and post-delivery. The Austal USA and General Dynamics Mission Systems team leading the Independence-variant builds recently integrated a new over-the-horizon missile system capability onto the USS Gabrielle Giffords (LCS 10) prior to her deployment as she meets U.S. Navy operational requirements and more LCS prepare for deployment.

“In the Pacific, USS Gabrielle Giffords is strengthening maritime security and regional stability with every port visit, exercise, and operation in which she participates” Perciavalle continued. “The LCS program has become instrumental to the U.S. Navy fleet as ships deploy from San Diego. We’re looking forward to seeing the USS Oakland and her sister ships follow in the path of the Giffords and Montgomery.””

More than 700 suppliers in 40 states contribute to the Independence-variant LCS program.

Austal is also under contract to build 14 Expeditionary Fast Transport vessels (EPF) for the U.S. Navy. The company has delivered 11 EPFs while an additional two are in various stages of construction.