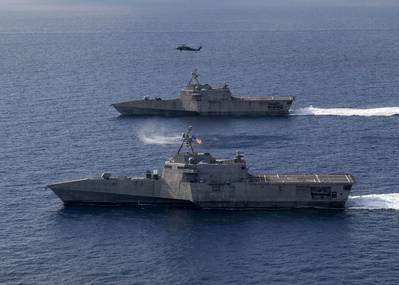 Austal USA finalized a deal to establish a repair facility in the Port of San Diego.

The deal, first announced in November, includes a long-term lease of a waterfront site in National City adjacent to Naval Base San Diego, and the 15-acre site will focus on ship repair for U.S. Navy, Military Sealift Command and U.S. Coast Guard ships. The site will be centered on a newly-built dry dock designed to efficiently dock small surface combatants and similar sized ships.

“This agreement marks a major milestone in the continued growth of Austal USA’s services business. When the dry dock is delivered we will be able to provide the Navy a highly capable full-service repair facility located in the homeport of San Diego,” Austal USA President Rusty Murdaugh said. “We know how valuable this additional repair facility is to our customers, the Navy, Coast Guard, and Military Sealift Command, and we are ready to meet the growing demand.”

Austal USA will establish a full service ship repair capability providing maintenance and modernization for small surface combatants, unmanned and autonomous vessels, and other ships. The site will include a dry dock optimized to execute availabilities on Littoral Combat Ships (LCS) and other small surface combatants. Services will include technical and material support, topside work, and drydocking availabilities. The new facility will enable more availabilities to be completed in their home port of San Diego reducing the strain on the fleet and sailors.

This lease agreement follows a string of maintenance contract awards for Austal USA. In August, the Navy awarded Austal SEC East and West contracts positioning the company to service all Littoral Combat Ships. In November, Austal received a contract to provide services and support for LCS deployed to the Western Pacific and Indian Ocean. These contracts are the result of the company’s significant investment in and continued focus on growing its service business and centers in Mobile, San Diego, and Singapore.