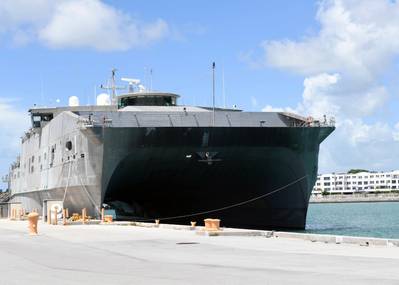 Austal USA, builder of the Spearhead-class EPF, will design, procure, implement and demonstrate EPF 13 as an autonomous platform. This award builds on Austal USA’s previous autonomous work for the U.S. Department of Defense.

The enhancements will allow EPF 13 to operate autonomously while retaining the capability for manned operation. The work will include installation of a perception and autonomy control suite, as well as several automation enhancements to the machinery plant improving hull, mechanical and electrical (HM&E) reliability while reducing the amount of personnel required for operations and maintenance at sea.

Austal originally designed the EPF with a highly automated machinery plant that require only a small team to crew the ship. This not only reduces cost, but also centralizes ship operations to the bridge, the company said.

“As we’ve seen over the last decade, the expeditionary fast transport continues to provide new capability after new capability,” Austal USA Interim President Rusty Murdaugh said. “The evolution of this platform and its deployed performance from humanitarian assistance to operational support brings unmatched value to the warfighter. The potential of the EPF to operate unmanned opens the door to a range of new missions for the EPF ranging from logistics support to mine warfare and strike operations using vertical launch systems (VLS).”

Two EPFs are currently under construction at Austal USA’s shipyard in Mobile, Ala. with a third on contract awaiting start of construction.