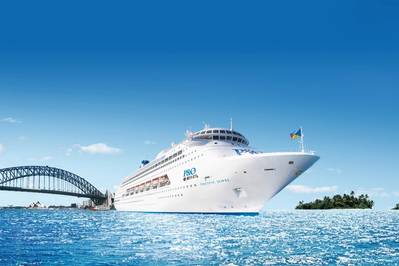 Pacific Jewel is part of the P&O Cruises' fleet of three ships currently based in Australia.

Carnival Corporation & plc (NYSE/LSE: CCL; NYSE: CUK) announced plans to expand in Australia, one of the fastest growing markets in the cruise industry.

With Australian cruise passenger numbers having increased 130%in the past five years and projections of 800,000 cruise passengers in 2013 growing to one million by 2016, P&O Cruises (Australia), one of Carnival Corporation’s 10 brands, will add two ships to its fleet in 2015. With a total of five ships, P&O Cruises will establish Australia’s largest year-round fleet and be well-positioned to continue meeting Australians’ surging demand for cruise vacations.

The two ships will be transferred from the company’s Holland America Line brand to become part of the P&O Cruises fleet. In the meantime, Holland America Line is building its latest and largest ship, to be delivered in February 2016. The new Pinnacle Class ship will be 99,500 tons and carry 2,660 passengers. This new ship will replace the capacity of the two vessels moving to P&O Cruises in Australia.

“Australians know a good thing when they discover it, and that speaks to why taking a cruise has become the most popular vacation experience in the Australian tourism industry,” said Arnold Donald, CEO of Carnival Corporation. “By any measure, Australia is one of the top performing cruise markets in the world, with an eye-popping average annual passenger growth rate of 20 percent over the past decade.”

Added Donald: “Our ability to work among our brands to make strategic deployment decisions is a great example of our focus on leveraging our scale and increased collaboration. This is an exciting development on many levels.”

Carnival Corporation is one of  largest cruise operators in Australia and the only cruise company to have ships based full-time in Australian waters. Over the past 10 years Carnival Corporation has grown rapidly with its local fleet increasing from two full-time ships, both with P&O Cruises, to six full-time ships from three of the company’s brands – three P&O Cruises ships, two Princess Cruises ships and one Carnival Cruise Lines ship. In 2015, with P&O Cruises adding its two ships and the return of Princess Cruises’ Sun Princess full-time, that number will increase to nine.

The company’s ships sail from five Australian cities as well as Auckland in New Zealand. During the past summer cruise season in Australia, the company had a record 20 ships from across seven of its brands sailing in Australian waters.

"The announcement is an emphatic statement of confidence in Australia, one of the most vibrant cruise markets in the world,” said Ann Sherry, CEO of Carnival Australia. “Today’s news also underscores how P&O Cruises – which pioneered cruising in the country more than 80 years ago - has been the driving force in making cruising one of the most popular vacation experiences in Australia. We have a great understanding of what Australians are looking for in a vacation, and with cruising more popular than ever among Australians, this is the perfect time to meet demand with increased capacity.”

Today’s announcement follows recent news that Carnival Corporation in 2015 will be the first global cruise company with four ships based in China, also considered one of the  fastest-growing cruise markets. Together, the company’s moves highlight its strategy to strengthen its leadership position through the Asia-Pacific region, which includes Australia, and positions the company well to realize the potential market growth.

The two ships being added to P&O Cruises, currently sailing as ms Ryndam and ms Statendam in the Holland America Line fleet, are mid-range in size, similar to the three existing P&O ships in Australia -- the Pacific Dawn, Pacific Jewel and Pacific Pearl. The ships will be completely refurbished to offer a new level of comfort and style and will include onboard features tailored for Australian and New Zealand passengers.

Having a five-ship fleet will give P&O Cruises greater flexibility in its increased offering of short-break cruises, traditional cruises to the South Pacific and cruises to new destinations such as Papua New Guinea and Asia.

The ships will join the P&O Cruises fleet in November 2015 and itineraries are being developed for the expanded fleet.