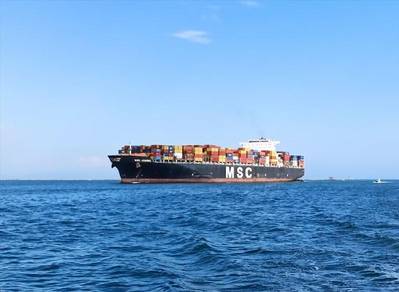 Authorities have made a major drug bust from a containership bound for Australia.

Earlier this month, Australian Federal Police (AFP) were tipped that the containership MSC Joanna allegedly contained a large quantity of cocaine on board, and authorities tracked the vessel as it made its way to Sydney.

Through Maritime Border Command, ABF officers provided ongoing monitoring of the vessel, including planning the aerial and on-water response. Aerial surveillance observed a man launching a small vessel from Taren Point and meeting the MSC Joana off the coast of Sydney before sunrise on March 11. Police allege 11 green lidded crates containing 199 blocks of cocaine were offloaded from the cargo vessel at sea and transported to the smaller vessel, which made its way back to shore before being intercepted by New South Wales Police Force officers.

The man was arrested at sea and conveyed to Balmain, Sydney by police vessel. He was subsequently brought up on drugs and money charges.

The smaller vessel was also transported to Balmain where the 11 crates containing approximately 200 kilograms of cocaine were offloaded. The seized cocaine has an estimated street value of A$90 million (US$70 million), authorities said.

Following the arrest, police followed the Panamanian-flagged MSC Joana until it docked at Port Botany. Police executed a search warrant on the vessel, with the assistance of ABF officers and the Detector Dog Unit. Police, with the assistance of ABF officers, also seized approximately $500,000 in cash from a storage unit in Caringbah, NSW allegedly linked to the alleged drug smuggler.

Investigations into the man’s associates and the transnational criminal syndicate said to be behind the drug importation are ongoing.

“Transnational organized crime groups prey on Australia’s lucrative drug market where Australians are among the highest per capita users of illicit drugs in the world, particularly in cocaine and methamphetamine,” said AFP Commander Kirsty Schofield. “Our investigators are working day in and day out to ensure we intercept these harmful drugs before they cause devastation to the lives of vulnerable Australians.”

ABF Enforcement Operations East Acting Commander Garry Low said criminals should be aware the ABF has eyes on our oceans, not just on our ports, airports and mail centers. “This arrest and seizure shows how quickly crucial information can be actioned into a successful operation with alleged offenders arrested and drugs prevented from making it to Australian shores,” A/g Cmdr. Low said. “My message to criminal syndicates is not only will we find your drug concealments when they reach our sea ports and airports, but we’re also watching your movements before you reach Australia.”