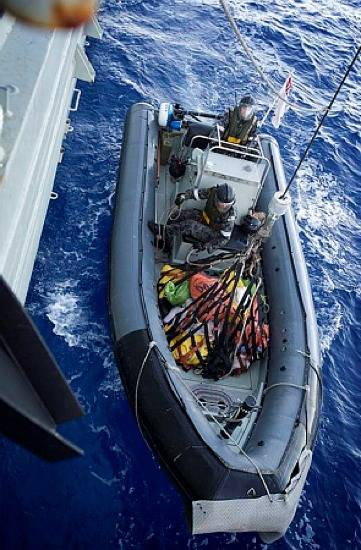 On the eve of Anzac Day commemorations, Royal Australian Navy (RAN) frigate 'HMAS Darwin' seized and destroyed more than one tonne of heroin.

The record 1032 kilograms of heroin was discovered on board a dhow in the Indian Ocean, approximately 27 nautical miles east of Mombasa, Kenya.

RAN explains that the record 1032 kilograms of heroin was discovered on board a dhow in the Indian Ocean, approximately 27 nautical miles east of Mombasa, Kenya. The circumstances were as follows:

Late on the 23rd April, HMAS Darwin located a suspicious dhow and deployed her boarding team. Working throughout the night, the boarding team discovered 46 sacks of heroin hidden amongst bags of cement.

“This latest interception is the largest heroin haul in the history of CMF with a street value of approximately $289 million (AUD). The success of this interdiction is testament to the highly effective interoperability of HMAS Darwin with the UK led Combined Task Force 150 under the Combined Maritime Forces (CMF), and the professionalism of Darwin’s crew,” Captain Powell said.

“This is a major heroin seizure, which has removed a major source of funding from terrorist criminal networks. The search tested the steel of Darwin’s boarding parties who were working in difficult conditions throughout the night,” Commander Morrison said.

Darwin is the 57th rotation of a Royal Australian Navy warship to the MEAO since the first Gulf War in 1990 and the 33rd deployment under Operation SLIPPER.

Operation SLIPPER is the Australian Defence Force contribution to the international campaign against terrorism, counter smuggling and counter piracy in the Middle East maritime security environment, an area of over two million square miles, encompassing the Red Sea, Gulf of Aden, Arabian Gulf, Arabian Sea, Indian Ocean and the Gulf of Oman.