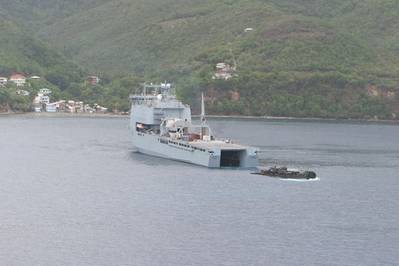 Danelec Marine informs it has supplied new-generation Voyage Data Recorders (VDRs) for three U.K. Royal Fleet Auxiliary (RFA) Bay-Class Landing Ship Dock (LSD) vessels.
The three ships, RFA Lyme Bay, RFA Mounts Bay and RFA Cardigan Bay, have been fitted with Danelec DM100 VDRs, replacing the existing VDRs which are no longer supported by the manufacturer. The type-approved Danelec DM100s bring the ships into compliance with the new IMO performance standards, which came into force in 2014.
The orders for the RFA ships were taken by Radio Holland U.K., which was responsible for overseeing the installation and commissioning of the VDRs on the three ships. Radio Holland UK is also providing worldwide service and support for the VDRs, including mandatory annual performance tests, as well as full life-cycle management of the full suite of bridge electronics on the vessels.
“The RFA installations are the latest manifestation of our excellent working relationship with Radio Holland,” said Hans Ottosen, CEO of Danelec Marine. “Radio Holland has been a valued distributor and global service partner for Danelec Marine products since 2005.”
The Bay-Class ships, which entered service in 2006-2007 are multi-mission craft designed for a wide range of sealift, amphibious and relief operations.