The March 2017 Edition of Maritime Reporter is Now Available 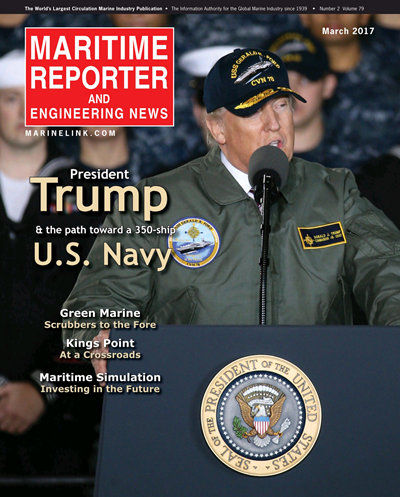 The March 2017 edition of Maritime Reporter & Engineering News, with U.S. President Donald Trump on the cover, is now available. Read it online here.

As this is Maritime Reporter & Engineering News’ ‘Green Marine’ annual, one might be surprised to see a recent photo of President Trump gracing our cover. Regardless of your personal feeling or political view, the story of President Trump and his new administration is arguably the maritime story of the year, as it touches on nearly every sector, from defense and national security to international commerce and infrastructure.

For the purposes of this edition the focus is squarely on the Navy, the kick-off to our 2017 Navy Quarterly coverage. As we were going to press the president announced, among other things, the plan to inject an additional $54 billion into defense spending, with the intent to rebuild the U.S. Navy high on the list. Regardless of administration, the shape and direction of the U.S. Navy is always fertile editorial fodder, both from its size and physical make up, as well as the technology that it develops and brings to the fore. When I sat in this seat for the first time in 1992, the U.S. Navy ... in terms of fleet size ... was already in decline with the end of the Cold War, the degradation of Russia as a military power and threat, and the change in course from President Reagan’s “600 ship navy.” Today the U.S. Navy force level is 274 ships, and while the numbers surrounding the ‘new’ navy continue to fluctuate, the number “355” has gained some traction. Starting on page 20, Edward Lundquist aims to add some shape, form and perspective toward the march to a larger navy, including some crucial questions as to the funding.

Looking toward the Green Marine topic, the days of using “Green” as just a marketing slogan are long gone. The push to make marine operations – already the most efficient and environmentally benign means to move cargo from Point A to Point B – even cleaner is rapidly underway. Earlier this year our Tom Mulligan initiated a series of articles centered on the new fuel rules from the IMO which effectively reduces sulfur content in marine fuel to 0.5% by 2020. The series continues this month with an insightful look at marine scrubber technology. It wasn’t long ago that scrubbers were seen as ‘too big’ or ‘too expensive,’ but the technology has been gaining strong favor as a preferred method to meet new regulations. Mulligan’s report starts on page 38, and is followed on page 44 with Eric Haun’s interview of Mark Barker at The Interlake Steamship Company, a U.S.-flag leader in the adoption of scrubber technology.

Finally, the matter of subdued oil pricing and a cloudy at best future for the development of offshore oil and gas assets – particularly in the more costly deep waters – continues to dampen a certain sector of the market. With that, you may be surprised to know that William Stoicheviski’s profile of the maritime business in Singapore is slightly upbeat. Stoichevski is our contributor situated in Oslo, Norway, a country with its fate and fortune closely tied to offshore energy production. Here, and half a world away in Singapore, Stoichevski finds hope and prosperity, as shipyards that were dedicated to offshore oil have invested and essentially reinvented themselves to serve new and emerging markets.