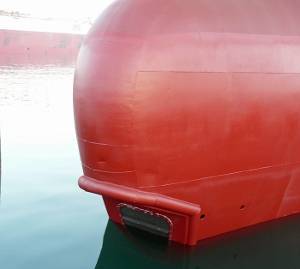 A forward-looking sonar from Marine Electronics Ltd of Guernsey, UK, has been installed aboard a British-operated tanker as a major initiative to refine operational safety. The See Echo system was developed by Marine Electronics in cooperation with the ship owner to provide a three-dimensional image of the sea up to one kilometre ahead of the vessel.  It is now undergoing a trials programme which, if successful, will result in its installation aboard other ships in the company’s substantial fleet. It is intended to provide an extra margin of safety against grounding and is the first application of ground avoidance sonar by a tanker operator which is aiming to set new standards of safety for the industry.

Unlike conventional sonars that look down from the ship and show the seabed directly beneath the keel, the See Echo looks ahead to provide an advance warning of any obstacles. It consists of two arrays that scan the sea ahead through a vertical arc of 20 deg and horizontally through a sector of 90 deg. They are linked by fibre-optic cable to a dedicated high definition touch-screen computer display on the ship’s  bridge. The images from the two arrays are  combined to create a three-dimensional representation of the sea ahead that can also be viewed with an electronic chart overlay. The display shows underwater objects and where they are in relation to the ship’s approach and their depth below the surface. The system also provides a movable “camera” viewpoint and is available with the option of target tracking and with a range of up to 1 km.

Installation of the See Echo on an operational tanker has been prompted by the enormous costs that can be incurred by operators if a ship goes aground or is damaged in such a way as to cause pollution. Despite the comprehensive nature of modern hydrography, uncharted areas are known to persist. These can be responsible for costly groundings such as that experienced by the QE2 in 1992 when it hit a rocky sea bed that had remained uncharted in busy waters off Martha’s Vineyard, USA.

The See Echo will also provide an alert for partially submerged objects such as cargo containers of which an estimated 10,000 are lost overboard every year. The sonar will also register the presence of whales and other sea mammals that are in the path of the ship. The acoustic frequency of the transmissions from the sonar has also been approved by the NOAA (National Oceanographic and Atmospherics Administration) in the USA as having little or no impact upon marine life.

Because the See Echo provides a three dimensional image, it has also been found very helpful for ships operating in sea ice. The display reveals the thickness of the ice sheet ahead and enables the ship’s master to decide whether it is possible to sail through it safely. This is expected to prove particularly important for cruise ships that are undertaking voyages into Polar waters. The sinking of the cruise ship Explorer in 2007 has confirmed the environmental and passenger safety risks that need to be guarded against.

The See Echo was developed on Guernsey in the UK Channel Islands where Marine Electronics Ltd has its headquarters. The system was fitted inside the bulbous bow of the tanker during a recent dry-docking in Dubai.  Installation required the design and construction of a sea chest, or water filled cavity, inside the bow to accommodate the two sonar arrays. An exceptionally strong acoustic window a little over 1 metre square has been made from a kevlar and carbon fibre composite and fitted into the bow so that the transmissions from the sonar can leave and return to the ship unhindered.  Despite presenting a flat surface at the ship’s bow, the size of the vessel is such that it has had no effect upon its hydrodynamics or fuel consumption.