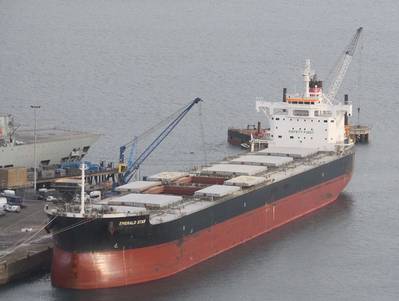 The Baltic Exchange's main sea freight index fell for a second straight session on Wednesday to its biggest one-day decline in nearly six months, as rates for capesize vessels fell after a strong run.

The Baltic index, which tracks rates for ships ferrying dry bulk commodities, fell 7%, or 151 points, to 2,014 points, its biggest one-day drop since January 31. The index has still more than tripled since February, mainly driven by strong demand for vessels that ship iron ore from Brazil into China.

"The recovery in the availability of ships should easily absorb the increase in Brazilian iron ore exports and put downward pressure on the Baltic index in the coming months," Caroline Bain, chief commodities economist at Capital Economics, said in a note. Brazilian miner Vale SA has been authorized to partially resume dry processing operations at its Vargem Grande complex, which should add 5 million tonnes to annual production.

Brazil's mining regulatory agency had ordered Vale to halt operations at Vargem Grande in February to guarantee the stability of its dams. "We think that the index will fall back as the iron ore trade normalises and the reality of slower global growth and weaker trade volumes kicks in," Bain added.

The supramax index was 2 points higher at 1,019 points.

A ship carrying 30,500 tonnes of U.S. soybeans was unloading its rare cargo on Friday after getting all regulatory permissions…