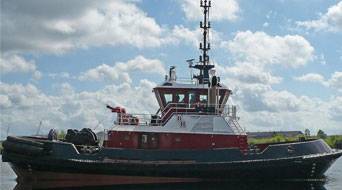 Bay-Houston Towing Co. has taken delivery of their third Z-Tech 7500 tug. The Z-Tech 7500 design is the largest of the Robert Allan line of Z-Tech tugboats. The Hunter M was delivered to Bay-Houston in April of this year by her builder, Conrad’s Orange Shipbuilding yard after dock and sea trials in Orange, Texas.

The Hunter M is the final boat in the series of Z-Tech 7500’s to be completed by Orange Ship Building. The arrival of the Hunter M brings to 18 the number of harbor tugs in Bay-Houston Towing Company’s fleet. The Hunter M’s principal dimensions are:
Length    98.5 ft
Beam    39.3 ft
Hull Depth    16.4 ft

The tug is powered by two Caterpillar 3516C engines, which produce 3150 horsepower each for a total of 6300 horsepower and a bollard pull of 75 tonnes. The EPA Tier II rated Caterpillar engines are mated to Model SRP-1520 Schottel drives. The Hunter M is fully FiFi 1 compliant, with twin Caterpillar C-18 engines powering the fire pumps, each rated at 5300 gpm. Electrical power is provided by two John Deere gensets, each rated at 125 kw. The winch on the Hunter M is a Markey Model #DYSF – 52 Escort Line Winch. The winch has an automatic render/recover mode, and is equipped with an application specific Markey tension meter. The winch will have a brake capacity of 500,000 pounds.