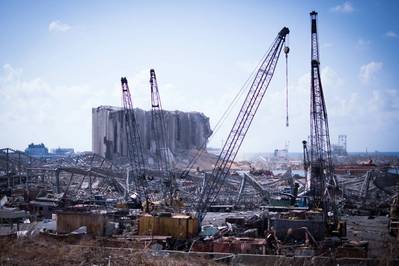 A fire smoldering for days at Beirut port has revived painful memories of the explosion that devastated the Lebanese capital in 2020, with the government struggling to find a way to extinguish it as the second anniversary of the blast approaches.

The fire has been burning slowly in the ruins of the port's grain silos, giving off an orange glow visible at night from neighborhoods that were most badly damaged by the Aug. 4, 2020, chemical explosion that killed more than 215 people.

The authorities say it is the result of summer heat igniting fermenting grain left in the silos since the blast, one of the most powerful non-nuclear explosions ever recorded.

The explosion was widely seen in Lebanon as a symbol of corruption and bad governance by a ruling elite that has also steered the country into a devastating economic meltdown.

"My heart is burning when I see the fire at the port," said Mona Jawish, whose daughter was killed in the blast.

"They are taking us back to the day of the crime," she added, as she took part in a protest on Wednesday by victims' families who want the silos preserved to commemorate the dead.

Much of the port still resembles a disaster zone, symbolic of the wider failures of a Lebanese ruling elite that has allowed the economic collapse to fester for three years even as poverty has soared and state services have collapsed.

No top official has been held to account for the blast.

Economy Minister Amin Salam told journalists gathered at the port on Thursday that it was not the first fire to erupt in the silos.

As wisps of smoke rose from the silos behind him, Salam said technicians were working on the problem but that it was complicated, as air pressure generated by army helicopters posed a risk to the silos and could spread the fire.

"The technical team is studying the best option," Salam said. "We aren't saying that there is no solution, but we are trying to find solutions whose consequences aren't bigger than the repercussions we are trying to avoid."

Removing grain from the silo risked their collapse, he added.

The civil defense service said the fire was caused by fermentation of "materials in the vicinity of the silos" and would reignite within days if extinguished. It noted the government had forbidden anyone from approaching the silos due the surrounding danger.

The inquiry into the 2020 blast has been paralyzed amid resistance from top politicians.

Reflecting their mistrust of authorities, some victims' relatives said they believed the fire had been started intentionally to destroy the silos, a towering reminder of the blast caused by a stash of unsafely stored ammonium nitrate.

Asked about those remarks, Salam cited experts' reports that it was the result of fermentation.

"They say they're worried about public safety," said Ilham al-Bikai, whose son died in the blast.

"The fire has been burning for more than a week."