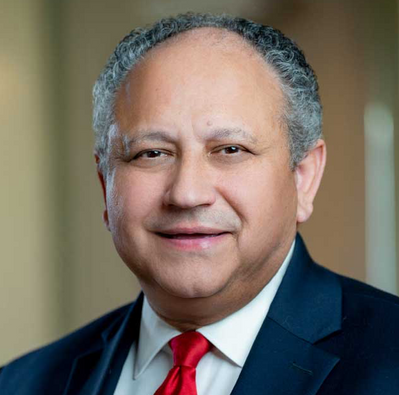 Over the course of a 22-year career in the U.S. Navy, Del Toro held a series of critical appointments, including Senior Executive Assistant to the Director for Program Analysis and Evaluation in the Office of the Secretary of Defense; First Commanding Officer of the guided missile destroyer USS Bulkeley; and Special Assistant to the Director and Deputy Director of the Office of Management and Budget.

He is founder of SBG Technology Solutions, Inc., and has served as the company's CEO and President for the last 17 years, supporting defense programs across a host of immediate and long-term Navy issue areas, including shipbuilding, AI, cybersecurity, acquisition programs, space systems, health and training.

Having earned a Masters in National Security Studies from the Naval War College and a Masters in Legislative Affairs from George Washington University, Del Toro has also supported military programs addressing policy and strategic studies.

Born in Havana, Cuba, Carlos Del Toro immigrated to the U.S. with his family as refugees in 1962. Raised in the Hell’s Kitchen neighborhood of New York City, he attended public schools and received an appointment to the United States Naval Academy at Annapolis, where he earned a Bachelor of Science Degree in Electrical Engineering. He was the first Hispanic President of the White House Fellows Foundation and Alumni association and serves on the Board of Directors of the Stimson Center. He was recently appointed to the U.S. Naval Academy Alumni Association’s Special Commission on Culture, Diversity and Inclusion.