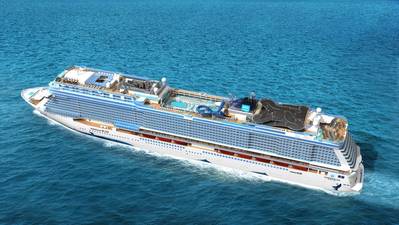 The Panama Canal welcomed the Norwegian Cruise Lines-operated Norwegian Bliss, the largest passenger vessel which to ever transit the waterway. The vessel weighs more than 168,000 gross tons and can carry nearly 5,000 passengers

"The Panama Canal is proud to welcome the Norwegian Bliss and recognizes that this distinct milestone is made possible by the Canal Expansion, as well as the experience and efforts gained in the two years since its inauguration," said Deputy Canal Administrator Manuel Benítez.
The Norwegian Bliss left Germany's Meyer Werft shipyard in March to begin a 15-day itinerary this month, sailing from Miami, Florida through the Panama Canal and up along the west coast of Central and North America before reaching its final destination at the Port of Los Angeles in California. The ship will then service the Alaska region until the end of the cruise season, after which it will be repositioned in the Caribbean.
"We are very proud to help the Panama Canal close out the season with the crossing of our highly-anticipated ship, Norwegian Bliss," said Andy Stuart, president and chief executive officer of Norwegian Cruise Line. "As she makes her way to Seattle, we are excited for this sixteenth ship in our young and modern fleet to begin welcoming guests and providing them with the stand-out service, dining, entertainment and amenities for which we are recognized."
For the Panama Canal, May 24 marks the unofficial end to the 2017-18 cruise season when it will transit the Pacific Princess, operated by Princess Cruises, as part of a 17-day voyage from Los Angeles, California to its final destination at the port of Fort Lauderdale.
The Canal's international trade specialist Albano Aguilar commented on the waterway's successful season. "By the end of its cruise season, the Panama Canal will have transited a total 248 passenger ships with a total of 312,304 passengers onboard," explained Aguilar. "Of this, a total of 20 cruises will be Neopanamax vessels, including the Caribbean Princess, Carnival Freedom, Carnival Splendor, Norwegian Bliss and Disney Wonder - all able to transit the waterway thanks to the Expansion of the Canal."
Smaller ships such as the Safari Voyager and the Wind Star also contributed to total transits. These vessels, with itineraries of eight and 11 days, respectively, visited ports located on the west coast of the Central American isthmus. Additionally, the Panama Canal received passenger ships that were not expected to transit, such as Le Boreal and Logos Hope.
Through the end of the season, renowned cruise lines such as Princess Cruises, Holland America Line, Royal Caribbean Cruises and Norwegian Cruise Line, among others, will continue offering itineraries for complete and partial transits, the last of which include Panama City and the interoceanic route, in particular, as destinations.