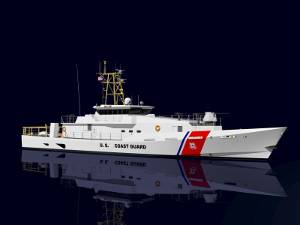 Bollinger Shipyards, Inc. announced that it was awarded a contract valued at over $142,000,000 to build an additional three Sentinel Class, 154-ft patrol boats, for the U. S. Coast Guard.  The initial contract for the design and construction of the lead ship in the class was awarded to Bollinger in September 2008. Under the current contract options, the Coast Guard can buy up to thirty-four patrol boats with Bollinger for a total value of over $1.6b.

The cutters will have a top speed over twenty-eight knots and will be able to perform seven day patrols with their crew of twenty-two. The cutter will also have a 40 knot rigid inflatable boat, RIB, that can be rapidly deployed using an innovative stern launching system that was first presented to the Coast Guard by Bollinger aboard the 87-ft Marine Protector class cutters.