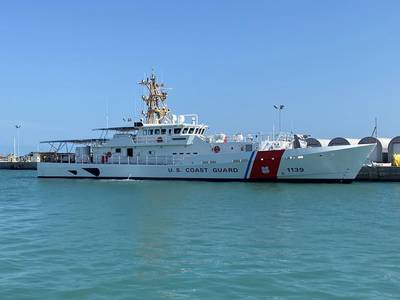 The USCGC Myrtle Hazard is the first of three FRCs to be home-ported in Apra Harbor, Guam, increasing the presence for the U.S. Coast Guard in the Indo-Pacific Theater. Additionally, later in 2020, Bollinger will deliver the first of six FRCs that will be home-ported in Manama, Bahrain, which will replace the Island Class Patrol Boats supporting the Patrol Forces Southwest Asia, the U. S. Coast Guard's largest unit outside of the United States.

“Our latest delivery of the USCGC Myrtle Hazard is an important milestone in the FRC program as it is the first of several vessels that will expand and support the Coast Guard’s operational presence and enhance the U.S.’s mission in the Indo-Pacific region – a focal point emphasized by both President Trump and Admiral Shultz,” said Bollinger President & CEO, Ben Bordelon. “Building ships for the U.S. Coast Guard provides critical assets to bolster our national security interests, both domestic and abroad.”

The homeporting of three FRCs in Guam is part of the U.S. Coast Guard’s "doubling down on Oceania," allowing more frequent and longer patrols in an area where the U.S. Coast Guard has increased its presence over the past 18 months and is aligned with the priorities set in the 2018 National Defense Strategy on countering strategic competitors such as China and Russia. U.S. Coast Guard Commandant Admiral Karl Schultz stressed the strategic importance of the service’s presence in the region saying, "We're on a trajectory where the geostrategic importance of the Oceania region has not been higher here in decades, and it's a place that the Coast Guard's looking to be part of the whole-of-government solution set."

While the last 12 weeks of the USCGC Myrtle Hazard’s build occurred during the COVID-19 global pandemic, Bollinger said it undertook precautions to ensure the health and safety of employees and maintain its delivery schedule. In addition to increased and enhanced sanitization practices across the shipyard, Bollinger enacted more liberal leave and remote work policies as well as altered shift schedules to promote social distancing.

Bordelon continued, “Delivering vessels on schedule and on budget to the Coast Guard in these unprecedented times given the COVID-19 challenges that we are all facing shows the resiliency and dedication of our incredibly capable workforce. The FRC hot production line continues to produce and provide stability in the industrial base for the U.S. government and our Bollinger workforce, assuring economic benefit for the Lafourche Parish, La. region, our vendor partners in the 40-plus states that support the FRC program, and our country.“

Each FRC is named for an enlisted Coast Guard hero who distinguished himself or herself in the line of duty. A young mother in 1918, Myrtle Hazard answered a help-wanted ad for a qualified radio operator after graduating from a radio and telegraphy class at the Baltimore YMCA. Extremely skilled in telegraphy and proficient in Morse code, Hazard enlisted in the the Coast Guard on January 21, 1918 and became the service’s first female electrician. Hazard worked at U.S. Coast Guard headquarters in Washington, D.C. as an electrician’s mate 3rd class and was later promoted to electrician, 1st class, before being demobilized after the war’s end.

The FRC is an operational “game changer,” according to senior Coast Guard officials. FRCs are consistently being deployed in support of the full range of missions within the Coast Guard and other branches of U.S. armed services. This is due to its exceptional performance, expanded operational reach and capabilities, and ability to transform and adapt to the mission. FRCs have conducted operations as far as the Marshall Islands—a 4,400 nautical mile trip from their homeport. Measuring in at 154-feet, FRCs have a flank speed of 28 knots, state of the art C4ISR suite (Command, Control, Communications, Computers, Intelligence, Surveillance, and Reconnaissance), and stern launch and recovery ramp for a 26-foot, over-the-horizon interceptor cutter boat.