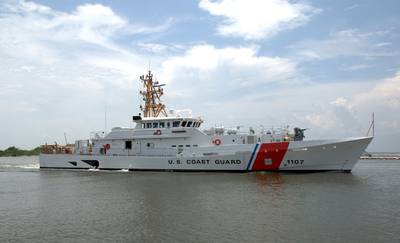 The announcement was made by Bollinger executive vice president of new construction, Chris Bollinger, “We are very pleased to announce another successful on-time and on-budget FRC delivery to the Coast Guard. The Charles David Jr. was delivered to the 7th Coast Guard District in Key West, Fla. and will be stationed at USCG Sector Key West. We are all looking forward to the vessel’s upcoming commissioning, as well as honoring and celebrating the heroic acts of Charles David, Jr.”

The 154-foot patrol craft Charles David Jr. is the seventh vessel in the Coast Guard's Sentinel-class FRC program. To build the FRC, Bollinger Shipyards used a proven, in-service parent craft design based on the Damen Stan Patrol Boat 4708. It has a flank speed of 28 knots, state of the art command, control, communications and computer technology, and a stern launch system for the vessels 26 foot cutter boat. The FRC has been described as an operational “game changer,” by senior Coast Guard officials.

Each FRC is named for an enlisted Coast Guard hero who distinguished him or herself in the line of duty. This vessel is named after Coast Guard Hero, Stewards-Mate First Class Charles W. David, Jr., who was posthumously awarded the Navy and Marine Corps Medal for his bravery. On the night of February 3, 1943, the U.S. Army transport USS Dorchester was torpedoed by a U-Boat off the coast of Greenland in the North Atlantic. The CGC Comanche was on the scene and its crew desperately searched for survivors in the frigid waters. David fearlessly volunteered to leave the safe haven of the COMANCHE to dive overboard to help rescue the Dorchester’s crew. As other crewmen also volunteered to dive in, 93 survivors were rescued out of the freezing waters.

After the last of the survivors were safely aboard, David began to climb the cargo net to the ship’s deck. One of David’s shipmates, Richard Swanson, was having trouble climbing the net due to his freezing limbs. David descended the net with the help of another crewman and pulled Swanson to the deck out of harm’s way. Tragically, David died a few days later from pneumonia.