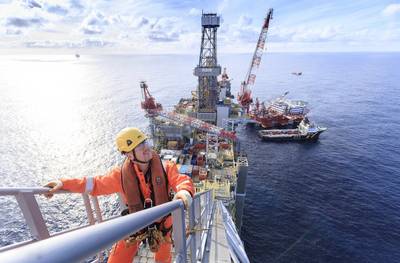 Energy giant BP has taken its first oil from the Clair Ridge mega-project in the U.K. North Sea in a “major milestone” that is the culmination of many years of work.

Clair Ridge is BP’s sixth major project start-up in 2018 following seven last year, which are expected to increase the company’s production by 900K boe/day by 2021. It has an estimated seven billion barrels of hydrocarbons.

According to a press release from the British multinational oil and gas company, two new, bridge-linked platforms and oil and gas export pipelines have been constructed as part of the Clair Ridge project.

The new facilities, which required capital investment in excess of £4.5 billion, are designed for 40 years of production. The project has been designed to recover an estimated 640 million barrels of oil with production expected to ramp up to a peak at plateau level of 120,000 barrels of oil per day.

Bernard Looney, BP Chief Executive Upstream, said: “The start-up of Clair Ridge is a culmination of decades of persistence. Clair was the first discovery we made in the West of Shetland area in 1977. But trying to access and produce its seven billion barrels proved very difficult. We had to leverage our technology and ingenuity to successfully bring on the first phase of this development in 2005.

“And now more than 40 years after the original discovery, we have first oil from Clair Ridge, one of the largest recent investments in the UK. This is a major milestone for our Upstream business and highlights BP’s continued commitment to the North Sea region.”

Clair Ridge is the first offshore deployment of BP’s enhanced oil recovery technology, LoSal, which has the potential to increase oil recovery from reservoirs by using reduced salinity water in water injection. This is expected to result in up to 40 million additional barrels being cost-effectively recovered over the lifetime of the development.

Ariel Flores, Regional President for BP’s North Sea business, said: “Safely delivering first oil from Clair Ridge, in some of the harshest conditions in the UKCS, is the result of years of planning and hard work by BP, our partners and supply chain colleagues. We are proud to have played our part in this pioneering project and are excited for the Clair region’s continued potential.”

In addition to the platforms, the Clair Ridge project also included new pipeline infrastructure with the installation of a 5.5-kilometer, 22-inch oil export pipeline tying into the Clair Phase 1 export pipeline. Oil from Clair is exported to the Sullom Voe Terminal on Shetland.

A new 14.6-kilometre, six-inch gas export pipeline tying Clair Ridge into the West of Shetland Pipeline Systems (WOSPS) was also installed as part of the project. The WOSPS transports gas from West of Shetland to the Sullom Voe Terminal.

Clair Ridge also features an advanced drill rig which will deliver a drilling program over several years. There are 36 well slots, two of which are being used for the tieback of pre-drilled wells. The drilling program, which is likely to last more than 10 years, includes drilling and completing development wells from the remaining 34 well slots.

LNG imports to Poland via the Świnoujście LNG Terminal  keep rising and stood at 3.4 billion cubic metres in 2019 after regasification…