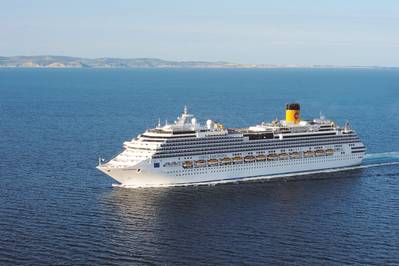 A Brazilian court has barred crew members from disembarking from the Costa Fascinosa cruise ship anchored with no passengers at the port of Santos after some of their mates developed coronavirus symptoms, city authorities said on Monday.

All passengers on the ship, which has a capacity for 3,800 passengers and crew, were disembarked on March 17 at Santos and only the crew remained in quarantined.

Santos is Latin America's largest port and where most of Brazil's agriculture commodities are exported.

Judge Alexandre Saliba ruled on Monday that only crew members who need medical assistance will be allowed disembark.

The judge ordered the Santos Port Authority to coordinate with Brazil's health surveillance agency Anvisa and Sao Paulo state and local health departments in the case of more crew members needing to disembark to get medical attention.

The cruise operator said its ship was in "voluntary quarantine" before the ruling and will remain so.

"All necessary health measures are being taken and the company is diligently following guidelines from local health authorities," the company said.

It was unclear when the quarantine would end or how many persons remained onboard. Costa said there is doctor on the ship who is responsible for assessing the crew's health.

The Santos Port Authority refused to comment on the court ruling, but said it is a priority to protect the health and safety of the port's workers, its users and the surrounding population.

(Reporting by Eduardo Simões and Ana Mano in and Pedro Fonseca; Writing by Ana Mano Editing by Marguerita Choy)

Philippine President Rodrigo Duterte has given his government a week to process some 24,000 repatriated Filipino workers…