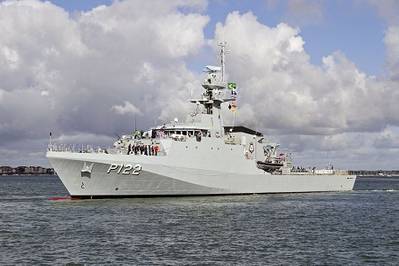 The newest ship in the Brazilian Navy’s fleet departed the U.K. on a journey of more than 10,000 miles to Brazil.

Araguari is the third of three Amazonas Class ocean patrol vessels delivered to the Brazilian Navy by BAE Systems. She is designed for maritime security, as well as being able to support humanitarian relief and search-and-rescue operations.

Her two sister ships, Amazonas and APA, were delivered by BAE Systems last year and have already begun operations in Brazil. They have recently played an important role in the security operation for the visit to Brazil by Pope Francis.

Araguari will make diplomatic visits in Europe and Africa before crossing the South Atlantic and receiving a warm welcome in Rio de Janeiro in September. After a brief stay, she will then proceed to her home port in the north eastern city of Natal.

Following the ship’s handover in June, Araguari’s 80 crew members completed the Royal Navy’s prestigious Flag Officer Sea Training, with the support of a team from BAE Systems, to prepare them for the journey and the operations they will perform in Brazil.

The contract for the supply of the three ocean patrol vessels and ancillary support services also includes a manufacturing license to enable further vessels of the same class to be constructed in Brazil, helping to support the country’s naval re-equipment program and strengthen its maritime industrial capability.

The 90-meter Amazonas Class ships are based on the design of the Royal Navy’s River Class Offshore Patrol Vessels and will provide maritime security in Brazil’s territorial waters, including the protection of the country’s oil and gas platforms.

The ships are equipped with a 30mm cannon and two 25mm guns, as well as two rigid inflatable boats and a helicopter flight deck. The ship contains additional accommodation for 40, designed for use by a boarding party of troops or passengers such as evacuees.