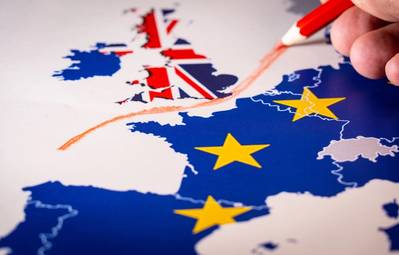 When Dutch boat captain and engineer Ernst-Jan de Groot applied to continue working in Britain after Brexit, he became ensnared in a bureaucratic nightmare because of an online glitch and says he is now likely to lose his job.

Under new immigration rules coming into force, de Groot faces the prospect of losing the right to come to Britain to work unless he can successfully apply for a visa through a government website by the end of June.

Following its departure from the European Union’s orbit at the end of December, Britain is changing its immigration system, ending the priority for EU citizens over people from elsewhere.

While the government has so far processed more than 5 million applications from EU citizens to continue living in Britain, lawyers and campaigners estimate there are tens of thousands who, like de Groot, risk missing the deadline.

Those who succeed are not given a physical document to prove they have the right to live or work in Britain, so they remain hostage to websites when they need to show evidence of their status at borders, or when they apply for mortgages or loans.

The experience of de Groot and eight other applicants spoken to by Reuters shows how Brexit has put some EU citizens at the mercy of government websites and officials, and how Britain may be inadvertently discouraging people with skills it needs.

“I am trapped in a bureaucratic maze that would even astonish Kafka, and there is no exit,” de Groot said. “I have tried everything I can think of to communicate the simple fact that their website is not functioning as it should.”

Labyrinthine nightmare
De Groot, 54, has worked happily in Britain on and off for the past six years.

He sails long, narrow barges from the Netherlands to England to be used as floating homes. He also spends a few months a year building boats at a shipyard near London and captains a tall ship around the west coast of Scotland in the summer.

A fluent English speaker, de Groot says he followed the post-Brexit rules by applying for a frontier worker permit to allow him to work in Britain while not being resident.

The online application was straightforward until he was asked to provide a photo. The next page of his application, which was reviewed by Reuters, said: “you do not need to provide new photos”, and there was no option to upload one.

A few weeks later, his application was rejected—for not having a photo.

So began a labyrinthine nightmare of telephone calls, emails and bureaucratic disarray. De Groot estimates he has spent over 100 hours contacting government officials who he said were either unable to help or gave conflicting information.

Some officials told him there was a technical issue that would be resolved quickly. Others said there was no problem.

Each time he phoned, de Groot said he asked the person to make a record of his complaint. On his last call, he said an official told him they did not have access to individual cases, so that was impossible.

He tried to start a new application to bypass the glitch but each time he entered his passport number it linked to his first application and he remained trapped in the photo-upload loop.

The Home Office, the government department that administers immigration policy, did not respond to requests for comment about de Groot’s case or the lack of physical documents proving the status of successful applicants.

Take back control
Over the past two decades, Britain experienced unprecedented immigration. When it was part of the EU, the bloc’s citizens had a right to live and work in the country.

A demand to reduce immigration was a driving force behind the campaign for Brexit in the 2016 referendum, with supporters calling for Britain to “take back control” of its borders.

Most EU citizens who want to stay will need to have applied for settled status before July. Others, such as de Groot, need to apply for visas to work in Britain.

Landlords, employers, the health service and other public departments will be able to ask for proof from EU nationals of their immigration status from next month.

The Home Office has a reputation for aggressively targeting people who do not have the correct documentation.

The government apologized three years ago for the Home Office’s treatment of thousands of Caribbean migrants, who were denied basic rights, including some who were wrongly deported, despite having arrived legally in Britain decades earlier.

So far this year, 3,294 EU nationals were denied entry to Britain with some taken to detention centers because they could not show a correct visa or their residency status.

Lawyers, charities and diplomats say some EU nationals may be unaware they need to apply, or are struggling to navigate the bureaucracy.

Chris Benn, a British immigration lawyer with Seraphus, a law firm contracted by the EU delegation to the United Kingdom to provide advice about the rules, has spent the last three years speaking at events telling EU citizens how to navigate the new system.

Although Benn said it was impossible to know how many people still need to apply, he is worried tens of thousands of people, and possibly a hundred thousand, may miss the deadline.

Benn says he is still meeting well-educated, fluent English speakers who don’t realize they need to apply. He is particularly worried the elderly, and people in rural areas such as those working on farms, may be unaware of the new rules.

“If even a very small percentage miss out, you will have very widespread issues,” he said.

Mistaken identity
While the system has worked well for millions, the nine EU nationals struggling with applications spoken to by Reuters say it seems overwhelmed. They complain of long waits to speak to staff in call centers and, when they get through, they are not given case-specific advice.

One of them, a Spanish student in Edinburgh, told Reuters he was concerned he would be unable to finish his studies because his settled status application in November has been put on hold.

Three days after applying he was informed in documents reviewed by Reuters that police considered he was being investigated for “culpable and reckless conduct” - an offence in Scotland for behavior that exposes an individual, or the public, to the significant risk to their life or health.

The student, who asked not to be named publicly for fear of jeopardizing career prospects, said he had never been in trouble with the police and he had no idea what the alleged investigation might relate to.

He requested details from the Scottish police. In replies seen by Reuters, they said their databases showed he was not listed for any crime, nor under investigation.

He has approached his university, campaign groups for EU nationals and the Spanish embassy asking for help. So far, no one has been able to get him out of the bureaucratic maze.

“The panic has been constant and gradual,” he said. “I end up thinking about it all the time because I might get literally kicked out of the country.”

A spokeswoman for Police Scotland directed questions to the Home Office.

The Home Office did not respond to requests for comment about the student’s case or complaints about call centers.

De Groot is equally frustrated. The company that usually employs him to captain a ship in the summer has started to look for someone else.

Diplomats say another problem is looming: what will Britain do with EU citizens who don’t have the right documents by July?

The government has said those who miss the deadline will lose the right to services such as free non-urgent healthcare and could be deported. Guidelines suggest leniency will only be granted in certain cases, such as for people with a physical or mental incapacity.

Even those with settled status are concerned that without a physical document as proof, they could still end up in immigration limbo if websites fail.

When Rafael Almeida, a research fellow in neuroscience at the University of Edinburgh, applied for a mortgage this year, he was asked to provide a share code generated by a government website to prove his settled status.

Almeida said the website would not work and he was greeted with a message: “There’s a problem with this service at the moment. Try again later.”

After a month of failed attempts to generate the code, Almeida’s mortgage broker persuaded the lender to accept only his passport as proof of identity. The website is still not working.

The Home Office did not respond to requests for comment.

Almeida is worried that from next month he will unable to access healthcare, apply for a job if he ever wants to, or return to Portugal to see family or friends.

“I am incredibly anxious, I am incredibly frustrated with the people who should have been taking care of this,” he said. “I am just really worried for the future.”

Moduteh Marine, of Tacoma, Wash., has gained recognition on meeting the stringent conditions of military contracts. In 2020…