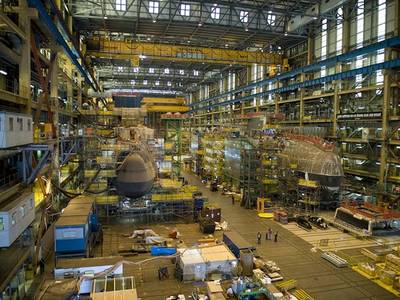 A shipyard in northern England that builds Britain's new generation of nuclear submarines was evacuated on Wednesday after what a local news website said was a bomb warning.

Ambulances and police were on the scene in Barrow-in-Furness in northwestern England. The defense ministry declined to comment.

"As a precaution, the Devonshire Dock Complex has been closed," a spokeswoman for BAE Systems said. "Staff, contractors and local residents are being kept informed."

An unidentified source told The Mail, a Barrow-in-Furness-based publication known previously as the North-West Evening Mail, that staff had been evacuated after a warning about a bomb on an Astute-class nuclear attack submarine.

Barrow-in-Furness makes the new generation of four Dreadnought-class ballistic missile submarines that will eventually replace the Vanguard class which form the basis of the United Kingdom's Trident nuclear deterrent.

Dreadnought-class submarines will measure 153 metres long, with a displacement of 17,200 tonnes, and have a PWR3 nuclear reactor.