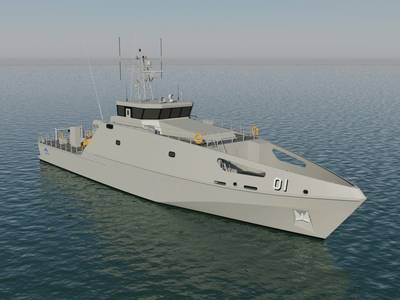 Australian Defense Industry Minister Christopher Pyne cut the red ribbon at the 10,500m² facility in front of defense industry stakeholders, suppliers and partners from across Australia.
Austal CEO David Singleton said the PPB-R project is estimated to create up to 207 jobs across production, project management, services and support - from Perth Western Australia to Cairns in Queensland.
“The PPB-R project is the first key element in the Federal Government’s Continuous Naval Shipbuilding Plan and Austal is proud to be leading the way by growing Australia’s shipbuilding capability,” he said. “It is worthy of note that this facility was originally built to service the mining boom and it has now been transformed to support what I anticipate to be a shipbuilding boom here in WA.”
Austal was awarded the A$306 million PPB-R contract in May 2016 and recently completed the Detailed Design Review (DDR), on schedule.
The PPB-R Project comprises the design, construction, delivery, training and sustainment of 19 39.5-meter Patrol Boats - to be gifted by the Commonwealth of Australia to twelve Pacific Island nations as part of Australia’s Pacific Maritime Security Program.
Construction of the Austal design will commence at Austal’s dedicated new PPB-R shipbuilding facility from late April 2017, with deliveries scheduled from 2018 to 2023. Sustainment of the new fleet of vessels will be carried out by Austal from facilities in Cairns, Queensland.
Austal is positioned to play a key role in the delivery of the Commonwealth’s continuous naval shipbuilding strategy, as the only ASX-listed Australian shipbuilder and Defence prime contractor currently delivering multiple naval vessel programs for Australian and overseas customers, including the Royal Australian Navy and U.S. Navy.
Minister Pyne was joined by Senator Linda Reynolds CSC and Western Australia Attorney General and Minister for Commerce, Michael Mischin.