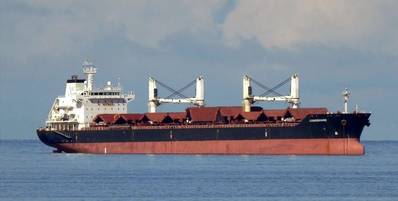 “This case demonstrates our commitment to investigating and prosecuting environmental crimes occurring at sea, no matter how wrongdoers may try to cover them up,” said Assistant Attorney General Todd Kim of the Justice Department’s Environment and Natural Resources Division. “The Department of Justice will continue to work with our partner agencies to ensure polluters are held fully accountable.”

“We are committed to protecting our environment from people who cause immeasurable harm with short cuts,” said U.S. Attorney Randy Grossman for the Southern District of California. “This was a very calculated plan to violate the rules, and today the offenders are being held to account.” Grossman thanked the prosecution team and the U.S. Coast Guard for their excellent work on this case.

“This prosecution highlights the U.S Attorney’s Office and the U.S. Coast Guard’s dedication in safeguarding our oceans against those that seek to deliberately harm our natural resources,” said Captain James W. Spitler, Sector Commander of the Coast Guard Sector San Diego. “Illegal dumping of oil and falsification of oil record books are egregious violations. Today’s guilty plea should serve as a reminder that the Coast Guard and our partners at the Department of Justice will work tirelessly to hold accountable those that seek to deliberately discharge oil and falsify ship records.”

New Trade and Plasabas each pleaded guilty to a felony violation of the Act to Prevent Pollution from Ships for failing to accurately maintain the Longshore’s oil record book. Under the terms of the plea agreement and subject to court approval, New Trade will pay a total fine of $1,100,000 and serve a four-year term of probation, during which any vessels operated by the company and calling on U.S. ports will be required to implement a robust Environmental Compliance Plan. Sentencing for the defendants is currently set for Nov. 18.

This case was investigated by the U.S. Coast Guard Sector San Diego and the U.S. Coast Guard Investigative Service. The case is being prosecuted by Assistant U.S. Attorney Melanie K. Pierson for the Southern District of California and Senior Trial Attorney Stephen Da Ponte of the Justice Department’s Environment and Natural Resources Division, Environmental Crimes Section.

Lebanon and Israel are closer than ever to signing a deal demarcating their maritime border, opening the door to new oil and gas exploration…

Rival of Container Shipper Matson Can Proceed with Antitrust Lawsuit