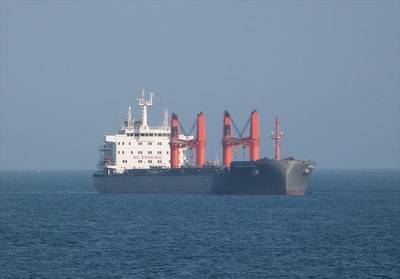 Using the Automated Mutual-Assistance Vessel Rescue System (AMVER), the Coast Guard issued a request for assistance, and the vessel Portuguese-flagged Nord Rubicon crew, located 80 miles northwest of the alert location, responded that they were willing to divert and assist the distressed mariners.

The Nord Rubicon personnel reported an estimated time of arrival of approximately 8 a.m.

The C-27 aircrew arrived on scene at 3:21 a.m. and reported the Blue Dragon was on fire and survivors were aboard a life raft nearby. The aircrew reported that the survivors were signaling the aircraft using a flashlight, and in response the aircrew deployed a flare along with a self locating datum marker buoy (SLDMB).

The Nord Rubicon crew arrived on scene at 9:30 a.m. and retrieved the seven crewmembers from the life raft. All crewmembers were accounted for and no injuries were reported.

The Nord Rubicon is en route to San Francisco with all Blue Dragon crew members.