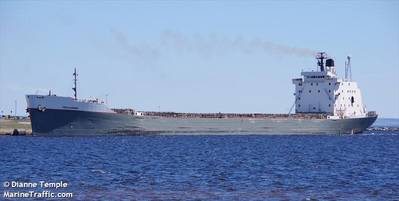 A fire broke out in the engine room of a lake freighter on the Detroit River on Sunday afternoon, the US Coast Guard reported.

A contracted firefighting team boarded the 641-foot Canadian bulk carrier Tecumseh and extinguished the fire overnight after all 16 crewmembers were safely disembarked and evaluated by local emergency medical services, the Coast Guard said.

Vessel traffic has not been impacted and no pollution has been reported in the area.

The 1970s-built vessel, which had been on the US side of the Detroit River near Zug Island at the southern city limits of Detroit when the fire occurred, is currently anchored by Windsor, Ontario, after drifting into Canadian waters.

The US Coast Guard said it worked with the Canadian Coast Guard, Transport Canada and Windsor Harbor Master through the night to coordinate response efforts and provide support.

The cause of the fire is under investigation.