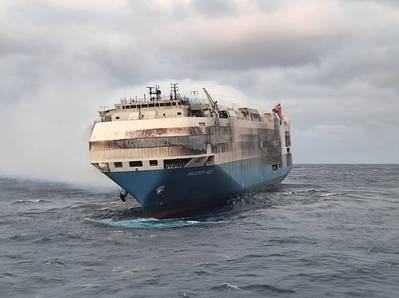 The fire-ravaged car carrier Felicity Ace has sunk off the Portuguese Azores archipelago nearly two weeks after it caught fire, the vessel's manager said on Tuesday.

"Initial reports from the local salvage team state that the vessel had sunk at around 9 a.m. local time having suffered a list to starboard," said MOL Ship Management (Singapore), a subsidiary of Japanese shipping company Mitsui O.S.K. Lines (MOL). "The last vessel position was around 220 nautical miles off the Azores."

All 22 crew members were safely rescued and the the 200-meter-long ship was left adrift and ablaze after it caught fire on February 16 while transporting 3,965 vehicles—including Porsches, Audis, Volkswagens, Lamborghinis, and Bentleys—from Emden, Germany to Davisville, R.I. The cause of the fire is unknown.

Salvors had been working to battle the blaze, but their efforts were hampered by lithium-ion batteries in some of the electric vehicles on board, according to port officials. Eventually, the flames began to subside, and by February 25 smoke was no longer rising from this ship, clearing way for salvage crews to embark the fire-stricken vessel, MOL said.

Felicity Ace was being towed by salvage ship Bear to a safe area off Azores, escorted by tugs ALP Guard and Dian Kingdom, together with a large salvage craft with additional firefighting capability V.B. Hispanic. These vessels will remain on scene to monitor the situation, MOL said in its latest update.

The 60,118 GT roll-on, roll-off vehicle carrier (RoRo) Felicity Ace was built in 2005 by Japanese shipbuilder Shin Kurushima Dockyard, and owned by Japan's Snowscape Car Carriers S.A. It was worth a current market value of $31.50 million, according to VesselsValue.

Insurance experts have said the incident could result in losses of at least $155 million for the car manufacturers.