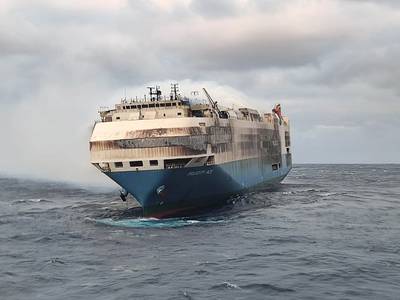 More than a week after a ship packed with luxury cars caught fire in the middle of the Atlantic Ocean, a salvage team managed to board the vessel on Friday and started to tow it to a safe location off the Portuguese Azores archipelago.

In a statement, ship manager Mitsui O.S.K. Lines Ltd (MOL) said the Felicity Ace remained stable, and the smoke that for days billowed from the vessel, adrift around 170 km southwest of the Azores, had stopped.

The 22 crew members of the Panama-flagged Felicity Ace, which was carrying around 4,000 vehicles including Porsches, Audis, and Bentleys from Germany to the United States, were evacuated last Wednesday, the day the fire broke out.

Some of the vehicles are electric and their lithium-ion batteries have made the fire very difficult to extinguish, port officials have said.

Previous attempts to board the ship to assess its condition and start preparing it for towing had failed due to the fire and rough seas.

On Friday, the team was able to board by helicopter and the salvage boat Bear started towing the vessel to a "safe area off Azores", the ship manager said. It was not clear where exactly the vessel was being towed to.

It was being escorted by two tug boats and another salvage craft equipped with firefighting gear, MOL said.

Insurance experts said the incident could result in losses of $155 million.