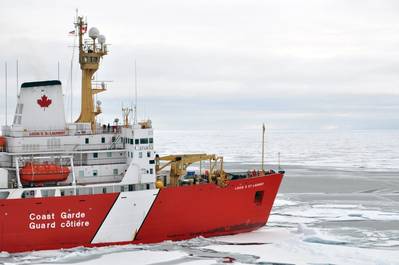 The Canadian government on Thursday promised to build two Arctic icebreakers and create hundreds of jobs in two politically influential provinces that will help decide an election considered likely this year.

The ruling Liberals, citing the need to boost Canada's Arctic footprint as global warming opens up the region, said at least one ship would be ready by 2030 when Canada's sole existing icebreaker CCGS Louis S. St-Laurent will be 62 years old.

"As northern waterways become more accessible, some countries are trying to encroach on our sovereignty by signaling their economic interest in a region that is rich in untapped natural resources," Environment Minister Jonathan Wilkinson told a briefing.

Russia and the United States are the other major Arctic players while an increasingly assertive China says the region is of strategic interest.

Ottawa says each ship will generate 300 jobs and create 2,500 other positions in various supply chains. One vessel will be built in Quebec's Davie shipyard and the other by Seaspan in British Columbia.

The two provinces together account for 120 of the 338 seats in the House of Commons and are crucial to the fortunes of Prime Minister Justin Trudeau, who aides say is likely to call an election by end-2021.

Yves-Francois Blanchet, leader of the opposition Bloc Quebecois, dismissed the announcement as electoral politics. House leader Pablo Rodriguez, the Liberals' senior Quebec minister, said the party was not focused on a vote.

"Let Mr. Blanchet talk about politics and elections and we will concentrate on what's important," he told the briefing.

The icebreaker project has suffered many delays since the previous Conservative government unveiled it in 2008.

Officials declined to give pricing details but said the cost of each ship would exceed the most recent estimate of C$1.3 billion ($1.1 billion), which was made in 2012.