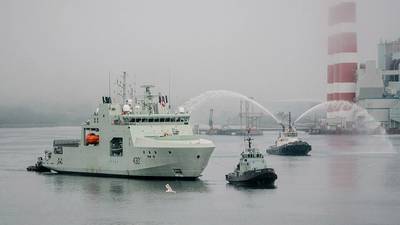 The first Arctic and Offshore Patrol Ship (AOPS), Harry DeWolf, was handed over on July 31, 2020, in Halifax, marking the delivery of the first ship in the largest fleet recapitalization Canada’s peacetime history. (Photo: Royal Canadian Navy)

The first Arctic and Offshore Patrol Ship (AOPS), Harry DeWolf, was delivered to the Government of Canada on July 31, 2020, in Halifax, N.S.

Built by Irving Shipbuilding, the new 6,615-metric-ton, 103.6-meter ship is the largest vessel ever built in Canada in a combat package as well as the largest Navy vessel built in the country in more than 50 years. It is also the first warship to be delivered as part of the National Shipbuilding Strategy (NSS), with many more ships to come as part of the Navy's future fleet. As outlined in Canada’s defense policy, the Canadian government is investing in six new AOPS to support the current and future needs of the Royal Canadian Navy (RCN), plus two variants of the AOPS for the Canadian Coast Guard.

“Today’s delivery of the first AOPS is very exciting not only for currently serving members of the Royal Canadian Navy, but moreover, it is also inspiring for our aspiring shipmates, seeking state-of-the-art technology to form new experiences in and expand their professional horizons,” said Vice-Admiral Art McDonald, Commander of the RCN.

“What this new fleet brings to the table is impressive. It is designed with a thick and robust hull that will allow it to operate in up to 120 cm of first-year sea ice. With its considerable space to efficiently transport cargo, it can accommodate a Cyclone helicopter as well as small vehicles, deployable boats and cargo containers.”

Designated the Harry DeWolf-class in honor of Canadian naval hero Vice-Admiral Harry DeWolf, the first vessel handed over in the new class of ship marks the first delivery of the largest fleet recapitalization Canada’s peacetime history.

Specifically designed to patrol Canada’s offshore waters and northernmost regions, this new class of ship will be at the core of an enhanced Canadian Armed Forces (CAF) Arctic presence, effectively complementing the capabilities of other current and future warships through critical reconnaissance and surveillance activities, and enabling the RCN to have unescorted access to areas of the Arctic that were previously inaccessible.

In addition to highly versatile platforms that will enable the ship to support a variety of domestic and international missions, its modern accommodations and facilities will also significantly improve the comfort and quality of life for its crew, underscoring the CAF’s commitment to improved inclusivity and well-being for personnel. Its modern facilities include gender-inclusive washrooms, individual crew accommodations, and the flexible use of common spaces, such as the briefing room, wardroom and boarding party room, to serve as a silent space for prayer or meditation required for various religious practices.

Her Majesty’s Canadian Ship (HMCS) Harry DeWolf was launched on September 8, 2018, completed builder’s trials at sea in November 2019, then completed acceptance trials in July, followed by crew training for the members of the Royal Canadian Navy who will comprise the ship’s company.

The vessel was moved from Halifax Shipyard to the CFB Halifax Dockyard, where it will be based. The ship will require significant work and additional tests and trials to complete construction and operationalize the ship. Once complete, the ship will undergo a formal commissioning ceremony in summer 2021, which will mark its entry into active naval service.

Kevin McCoy, President, Irving Shipbuilding Inc., said, “This is a historic day for our 2,000 shipbuilders and Halifax Shipyard, as we successfully delivered the first-in-class HMCS Harry DeWolf, the lead vessel in Canada’s next generation fleet. This brand-new class of Arctic and Offshore Patrol Vessels is the most modern in Canadian history and will provide decades of outstanding service for the men and women of the Royal Canadian Navy. We are immensely proud to be building these ships in Canada and with Canada’s best shipbuilders right here in Nova Scotia.”

Three additional AOPS ships are currently in production, with delivery of the second ship expected in 2021. The future HMCS Margaret Brooke was launched in November 2019 launched and continues construction in the water at Halifax Shipyard, the future HMCS Max Bernays is in the Assembly Hall at Halifax Shipyard preparing for a move to land later this year, while the future HMCS William Hall entered the Assembly Hall last November and will soon have the keel laying. First steel on the fifth AOPS will be cut in the coming months. Construction of the seventh and eighth ships is expected to begin in 2022 and 2023, respectively.

Future crew members of HMCS Harry DeWolf are in the process of conducting operational readiness and training activities to familiarize themselves with the ship and how it functions. As part of this training, the RCN is planning a deployment near Newfoundland and Labrador this fall that will prepare the crew for a deployment to the Arctic next year.

“This new class of ship is built for a real and clear purpose, and will provide the RCN with a modern, effective and high-quality ship to patrol Canada’s three coasts,” said VAdm McDonald. “We look forward to welcoming the first new AOPS into RCN service in summer 2021.”

The AOPS will primarily conduct presence and surveillance missions along Canada’s maritime approaches, to know who is operating in our waters and be prepared to react to a wide variety of incidents. They will also support other government departments and agencies, such as the Canadian Coast Guard, that are focused on ensuring safe navigation of shipping in the Arctic waters.

These contemporary and multifunctional ships will be at the core of an enhanced Canadian Arctic presence, and will effectively and strategically complement the capabilities of our current and future warships through critical reconnaissance and surveillance operations. They will also be capable of participating in a wide variety of international operations such as anti-smuggling, anti-piracy, and international security and stability. These ships will be able to contribute to humanitarian assistance, emergency response and disaster relief domestically and internationally, and undertake a diverse range of missions worldwide.

The RCN is growing in terms of capabilities, domestically and abroad. Work is ongoing to complete the Nanisivik Naval Facility, which will support operations of the new AOPS and other government maritime vessels. This new facility is expected to be completed in 2022.