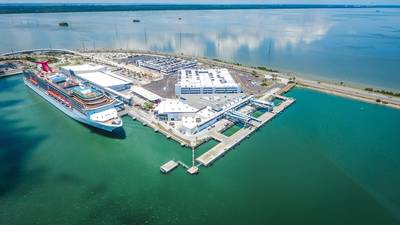 After undergoing a $48.38 million transformation in order to handle larger and modern ships, Cruise Terminal 5 opened this past weekend hosting the Carnival Valor.
The improvements include an expanded terminal, a longer 120-foot longer pier, a new 1,044-space parking garage, and new mobile passenger boarding bridges. Carnival Sunshine also will berth at Terminal 5.
Renovation of the 1991-built terminal began in August to allow Cruise Terminal 5 to handle ships carrying up to 3500 passengers, up from its previous capacity of 2500.
The projects involved a majority of local workers consisting of 37 companies with a construction crew of 500 on the terminal and 50 companies with a crew of 450 on the parking garage for a total of 265,000 hours with zero injuries.