Carnival Horizon Cleared to Sail after Allision in NYC 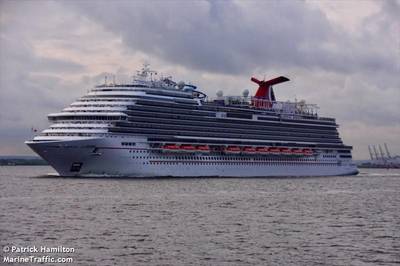 The U.S. Coast Guard has cleared the Carnival Horizon to sail after the 133,500 GT cruise ship struck a pier at the Manhattan Cruise Terminal earlier this week.

The Coast Guard conducted an extensive investigation and examinations on the ship and required multiple technical surveys, including an underwater hull survey and operations testing of essential equipment, before it ultimately determined that the ship was safe depart the Port of New York and New Jersey on its scheduled eight-night Caribbean cruise.

Minor structural damage to the ship’s bow was discovered, but the Coast Guard said the damage does not adversely impact navigation safety.

No injuries or pollution were reported when the 323-meter, 3,960-passenger Carnival Horizon struck Pier 90 while mooring at Pier 88 on the west side of Manhattan on Tuesday morning.

The Coast Guard said it is working with City officials to determine the extent of the damage to the pier. In the meantime, vessels will not be able to moor at Pier 90 until permanent repairs are completed.

Coast Guard Investigators are also coordinating with the National Transportation Safety Board and the Board of Pilots Commission to continue the ongoing investigation into the cause of the incident.

Carnival Horizon, the second ship in second in Carnival’s Vista-class, was delivered from Italian shipbuilder Fincantieri in March this year. The ship has spent the summer sailing from New York before a planned shift to Miami toward the end of September.