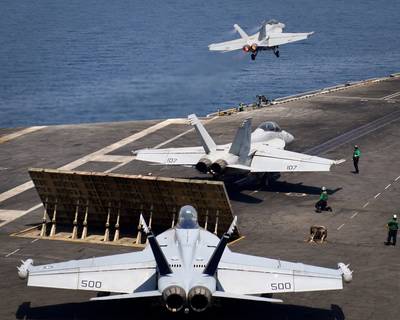 The Nimitz Carrier Strike Group (CSG) is carrying out strike sorties from the Arabian Gulf in support of Operation Inherent Resolve (OIR).

The first aircraft launched from USS Nimitz (CVN 68) was an F/A-18E Super Hornet assigned to the "Argonauts" of Strike Fighter Squadron (VFA) 147. Accompanying Carrier Air Wing (CVW) 11 squadrons, part of that first flight include the "Black Knights" of VFA-154, the "Blue Diamonds" of VFA-146, the "Death Rattlers" of Marine Fighter Attack Squadron (VMFA) 323, and the "Bluetails" of Carrier Airborne Early Warning Squadron (VAW) 121.
"For the Nimitz Strike Group, today is game day," said Rear Adm. Bill Byrne, commander of CSG-11. "When you hear the roar of the jets today it is for real. It's game on. Our pilots and aircrew are demonstrating our continued commitment to this region and all of our partner nations."
Byrne credited the entire crew for the first successful flight operations, and he let them know how important they all are to the operation's success.
"While it is the aircrews that will be on the very pointy end of our spear, the contribution of everyone is equally important to making this happen," said Byrne. "Every member of the crew has done their part to ensure we are ready to fight today."
Other aircraft from CVW-11 embarked on the aircraft carrier USS Nimitz (CVN 68) also conducted the flight operations. This included the "Gray Wolves" of Electronic Attack Squadron (VAQ) 142, the "Eightballers" of Helicopter Sea Combat Squadron (HSC) 8, the "Wolfpack" of Helicopter Maritime Strike Squadron (HSM) 75, and the "Providers" of Fleet Logistics Support Squadron (VRC) 30.
Carrier strike groups demonstrate the mobility, flexibility and power projection capabilities of the U.S. Navy's globally deployed force. They also deter potential adversaries, respond to humanitarian crises, reassure partners and enhance security.
The Nimitz Strike Group's deployment to the U.S. 5th Fleet area of operations supports Operation Inherent Resolve and signals the continued commitment to defeat and destroy ISIS. In addition to anti-ISIS missions, the ship and strike group are conducting maritime security operations to reassure allies and partners, preserve freedom of navigation, and maintain the free flow of commerce.