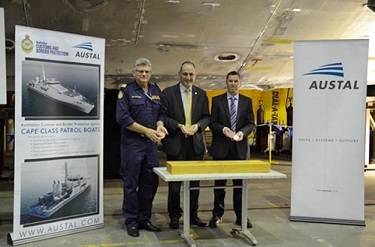 Demonstrating the rapid progress of the Cape Class Patrol Boat Program, Austal today hosted the keel-laying ceremony for the third vessel, Cape Nelson, one of eight 56-meter patrol boats that Austal is designing, building and supporting for the Australian Customs and Border Protection Service.

Keel-laying traditionally marks the first significant milestone in a ship’s construction. Historically this was the “laying down” of the main timber making up the backbone of a vessel. Austal’s advanced shipbuilding techniques means fabrication of ship modules begins well before they are actually joined. So today Austal celebrates keel-laying when modules are brought together for final assembly.

Although Austal’s design and manufacturing approach is thoroughly modern, the ceremony retained long held shipbuilding traditions. This included placing three specially minted coins under a keel block as a symbol of good fortune and to bless the ship. These coins will be removed just prior to the patrol boat’s launch.

Speaking at the ceremony, Mr. Backhouse remarked “This is another special occasion and indeed milestone that is made possible by the passion, dedication and strong bond of collaboration between our Customer, our staff, our partners and indeed our many suppliers. A collaboration that in a short space of time has also taken this program from only one vessel being in production to now five vessels in production supported by a workforce, including additional apprentices, that has increased by some 100 over recent months. Great achievements that we believe positions Austal well to provide state of the art Maritime capability to the Commonwealth of Australia either through more additional Cape Class vessels or indeed the early replacement of Armidale Class Patrol Boats”.

Cape Class is a program of work that underpins Austal’s strategy as a global defence prime contractor of Ships, Systems and Support. It’s a program that has also enabled Austal to reposition and strengthen the Henderson facilities as a defense-focused operation. This total solution capability represents the future of the Australian business as Austal continues to expand and enhance the strategic industry capability necessary to meet the current and future defense needs of Australia and other nations.

In doing so, the Cape Class Patrol Boats play a significant role in protecting Australia’s borders from multiple maritime threats, and have been designed to have greater range, endurance and flexibility, as well as enhanced capability to operate in more severe sea conditions than the current Customs and Border Protection fleet.

Austal was awarded the contract for the design, construction and through-life support of the Cape Class patrol boats for the Australian Customs and Border Protection Service in August 2011. The eight 58-meter aluminum monohulls are due to be delivered between March 2013 and August 2015.

The support contract extends for a minimum period of eight years and encompasses a full range of intermediate and depot level maintenance activities. Further options can be exercised by the Australian Customs and Border Protection Service for In-Service Support for the life of the Cape Class Patrol Boat Fleet.

The Cape Class Patrol Boats will have greater range, endurance and flexibility in responding to maritime security threats than the current fleet.

These vessels will also have enhanced capability to operate in higher sea states and survive in more severe conditions.

The Cape Class Patrol Boats will be able to undertake 28-day patrols; sail 4,000 nautical miles before having to refuel; combat the full range of maritime security threats; carry a larger crew to more effectively and safely manage boarding operations; identify, track and intercept an extended range of threats in the maritime domain and gather intelligence and store evidence for matters that may proceed to the courts and launch two Tender Response Vessels simultaneously.

Customs and Border Protection patrol boats may be deployed according to aerial surveillance, community reports and/or radar sightings.