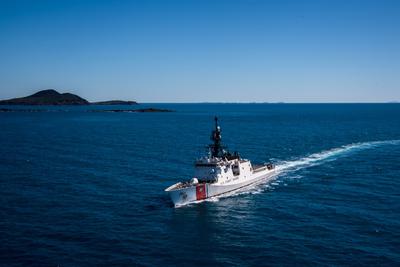 The crew aboard the U.S. Coast Guard Cutter Stratton (WMSL 752) is scheduled to return Friday to their home port of Alameda following a 162-day deployment to the Western Pacific Ocean.

In the Western Pacific, the crew patrolled and conducted operations as directed, including enforcing United Nations Security Council resolutions against the Democratic People’s Republic of Korea by monitoring and gathering intelligence on vessels conducting ship-to-ship transfers in the East China, South China and Yellow Seas.They also engaged in professional exchanges and visited ports in Fiji, Australia, Indonesia, Malaysia and the Philippines. Crew members combated illegal fishing and conducted community relations events and capacity-building exercises with navies and coast guards throughout the region.

Commissioned in 2010, Stratton was the third of the Coast Guard’s legend class national security cutters. These technologically-advanced ships are 418 feet long, 54 feet wide and have a 4,600 long-ton displacement. They have a top speed in excess of 28 knots, a range of 12,000 nautical miles, endurance of up to 90 days and can accommodate a crew of up to 170. National security cutters feature advanced command-and-control capabilities, aviation support facilities, stern cutter boat launch and increased endurance for long-range patrols to disrupt threats to national security further offshore.