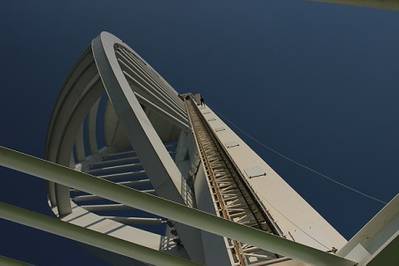 To upgrade the boathouse for the arrival of the new Shannon class all-weather lifeboat, and a smaller D class inshore lifeboat, the project needs to raise £200,000. Together with improved training and changing facilities for the volunteer crew, this will create a state-of-the art facility, securing Swanage into the future.

The abseiling team has already managed to break their planned target of £10,000.

James says, "We have raised over £15,000 for Swanage RNLI. We all tackled this with varying degrees of terror over the preceding days. Walking out on the tiny platform at the top of the tower was incredibly exhilarating - the views, the sunshine, the tiny dots of spectators below. Stepping off into the void was difficult, but the actual descent was one of the most thrilling things I have ever done. Thank you so much to the hundreds who supported us all.”