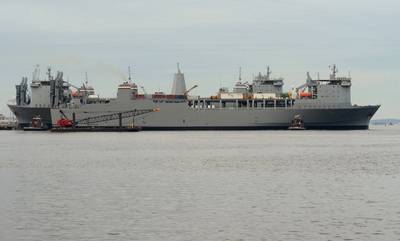 Experts on board a cargo ship transformed into a multimillion dollar chemical weapons destroyer said on Thursday they were ready to start working on Syria's stock of toxic arms in the middle of the Mediterranean as early as May.

Now they just have to hope the weather holds and Damascus delivers on time.

Former container vessel Cape Ray, docked in southern Spain, has been fitted out with at least $10 million of gear to let it take on about 560 metric tonnes of Syria's most dangerous chemical agents and sail them out to sea, said officials.

The Damascus government, fighting rebels for three years, agreed to hand over its stockpile, which include precursors for deadly nerve agents sulphur, mustard and sarin gas, under an international deal backed by Washington and Moscow,

On the Cape Ray, the specialised crew will transform much of it into a much less poisonous soup of chemicals, ready for disposal back on land.

The process, say officials on the hulking grey, five-storey vessel, is fairly simple. The main agent to neutralise the agents is hot water.

But things could get trickier if the seas turn rough.

"Everything depends on the roll of the ship and they have tested that," said Michael Luhan, spokesman for the Organisation for the Prohibition of Chemical Weapons (OPCW) which is running the disposal operation with the United Nations.

"They had some trial runs with the Cape Ray before it set sail and they are confident they should be able to keep operations going in relatively calm seas," he added.

If they are calm, the Cape Ray - with a 10-country security escort - will head to somewhere in international waters and take about 60 days of round-the-clock processing to neutralise the chemical agents, said Rear Admiral Bob Burke, director of U.S. naval operations in Europe and Africa.

If seas are rough, the process could stretch out to 90 days, though the weather at that time of year is usually fine, he added.

Whatever happens, there would be no risk to the blue waters of the Mediterranean, both officials insisted. "The ship will store every drop of effluent from the destruction process. Not a drop will go into the sea," said Luhan.

Just Add Hot Water
Another source of uncertainty is whether the Syrian government will deliver the deadly agents on time.

Syrian President Bashar al-Assad agreed to hand over his chemical weapons after Washington threatened missile strikes in reaction to a sarin gas attack that killed hundreds of people in the outskirts of Damascus in August.

Syria now has until June 30 to eliminate its chemical weapons programme and has already handed over roughly half its stockpile, which has been loaded onto Norwegian and Danish ships in the Syrian port of Latakia, OPCW officials said on Thursday.

Almost all of the rest of the agents have been packed up and are now located at a few sites near the Syrian city of Homs, the OPCW added.

"The Syrians control the timeline. They've committed to deliver the materials no later than the 27th of April. If they meet that commitment we would be starting the process within days," Burke told journalists touring the vessel at the U.S.-funded Rota naval base.

Assad has cited unrest around Latakia as the most recent reason for delays in delivering the chemicals still in Syria.

Once they get to Latakia, the blister agent mustard and sarin precursor chemicals, considered top priority chemicals for destruction, will be put on board Danish ship Ark Futura for transport from Syria to Italian port Gioia Tauro, said officials.

From there they will be transferred to the Cape Ray in a ship-to-ship operation.

The Cape Ray, used by the U.S. government for special missions, dates back to the 1970s. But it has been filled with the latest air pressurising systems and filters, safety equipment, an emergency helicopter pad and two treatment units, housed in tent-like structures.

Experts on the ship will use the hydrolysis process - where hot water is added to the agents to cause a reaction that turns them into low-toxicity effluent.

The result will be thousands of tonnes of liquid toxic waste that the Cape Ray will store and then deliver to Germany and Finland for commercial destruction, most likely incineration, Burke said.

Luhan said the destruction mission was unprecedented in terms of funds, the large number of countries involved in security, equipment and technology, and the attempt to destroy the entire chemical weapons arsenal of a government involved in a civil conflict.

The rest of Syria's chemical weapons - 800 metric tonnes that are not processed on the Cape Ray - do not need to be neutralized with this process and will go straight from the Latakia port to commercial destruction facilities in various countries.

(By Fiona Ortiz; Editing by Anthony Deutsche and Andrew Heavens)